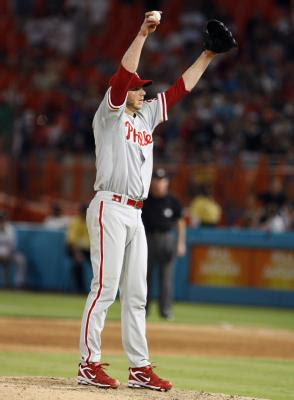 Something you never thought you would see is finally here...Phillies road games in Philadelphia. Thanks to the well documented issues with the G20 summit in Toronto, this weekend's 3-game interleague series was moved to Philadelphia. The games will still be played as though the Blue Jays are the home club, with American League rules.

Fans in Toronto looked forward to this series with great anticipation, as it would have marked the return of all-time great Blue Jays pitcher Roy Halladay, who was traded to Philadelphia after last season. Halladay spent over a decade with Toronto, collecting 148 wins in the process.

The Jays won't have to wait long to see Halladay, as he'll start the series opener on Friday night. The Blue Jays will counter with righty Jesse Litsch to start the series.

Toronto won all three games in Philadelphia last year. Read on for information on the pitching match ups and loads more details.

Shane Victorino has a .259 batting average this season batting in the leadoff spot. His average any other place in the lineup this season is .167.

DeWayne Wise, who was with the Phillies organization much of this year, before exercising an out clause in his contract, is now a Blue Jay and has gone 2-for-12 in 8 games thus far. Wise signed a minor league deal with Toronto, where he played in 2002, on June 5th and was promoted to the big club just 5 days later.

Toronto closer Kevin Gregg is 2-2 with 8 saves and 1 blown save with a 1.09 ERA in 22 career games against the Phillies. Jimmy Rollins, Jayson Werth, Shane Victorino, Chase Utley and Ryan Howard are a combined 4-for-41 (.098 avg.) against Gregg.