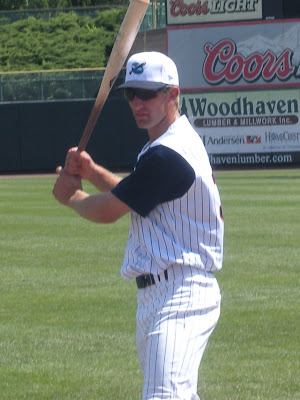 It took till the ninth inning for the second consecutive game in Lakewood, as the playoff bound BlueClaws struck late again, winning in walk-off fashion. The way the starting pitcher performed, however, perhaps it shouldn't have come to that.

Colby Shreve, a 22-year-old right-handed pitcher, rode a no-hitter into the seventh inning against the Nationals affiliate Hagerstown Suns. All it took was one bad pitch and the excitement that was beginning to grow among the 5,207 in attendance at FirstEnergy Park was quickly suppressed. Shreve hung a pitch up in the zone for Suns left fielder Justin Bluxom and the ball left the park in no-doubt-about-it fashion. "I threw the worst pitch of the day to Bluxom, and I've got to give him credit...he put a good swing on it and hit it out," Shreve stated after the game.

Shreve, who got 13 fly ball outs in his fast 7 innings of work, said he was aware of the no-hit situation, but wasn't letting it effect his approach to hitters. "I just kept saying to myself, 'Just do what you can do and go out there and locate," Shreve stated. However, he admitted that if the no-hit bid had gone deeper into the contest, that he might have allowed the scenario to consume more of his own thoughts.

Shreve, who had Tommy John surgery mid-way through the 2008 college season, was taken by the Phillies in the 6th round of that year's amateur draft. Shreve has posted a 4-4 record and a 3.71 ERA since joining the BlueClaws this year, his first professional season.

The Suns scored an unearned run in the first inning, when an errant throw from catcher Sebastian Valle on a Francisco Soriano stolen base attempt allowed Soriano to score. Hagerstown held the lead until the 6th inning, when Jonathan Villar singled off of Suns starter Mitchell Clegg to drive in Alan Schoenberger. Castro then stole two bases and was driven home by "The Boss" Jonathan Singleton, who slugged a doubled.

Hagerstown tied the score in the 7th inning on Bluxom's homerun and the game remained tied until the bottom of the ninth inning. After Kyle Lafrenz flied out to center, Alan Schoenberger struck out, but reached base because the third strike was a wild pitch by Suns reliever Kyle Morrison. Schoenberger advanced to second on a balk before Jonathan Villar nearly drove Schoenberger in once again, but Schoenberger was held at third base by manager Mark Parent. Not a bad move, as Schoenberger quickly scored when reliever Rob Wort, who had entered the game to face Leandro Castro, uncorked another wild pitch that enabled Schoenberger to score and gave Lakewood a 3-2 victory.

Lakewood's win in the previous game on Tuesday was a comeback victory in the bottom of the 9th, capped off by a Jiwan James RBI double that plated Adam Buschini. The two walk-off wins by Lakewood gives the team 9 total on the season.

Wednesday's match up resulted in a No Decision for Shreve, despite his excellent performance, allowing just one hit over 7 innings. Jordan Ellis, who got the last out in the 9th inning with the bases loaded, to maintain the tie score, earned the win. Shreve, who has seen a drop in velocity since his surgery, is staying focused on improving his own techniques and expressed satisfaction with the outing today and his overall progress as well. "I am just going to take things one step at a time, and just work. I feel confident in my pitching ability...and it feels great to help the team stay close and get victories."