By Jay Floyd June 20, 2010
In the A-Level South Atlantic League, division leaders at the midseason mark and at the end of the regular season advance to the postseason. Lakewood had a 2 game lead over rival Hickory with 2 games remaining till the deadline. The "magic number" for the BlueClaws was 1...either a victory by the 'Claws or a loss by Hickory would lock up another postseason berth for the defending SAL champs. Saturday night the BlueClaws seemed to have everything in order to clinch a playoff berth for the second straight season at the midway point. The BlueClaws were facing the last place Kannapolis Intimidators with their staff ace, 97 mph fireballer Jarred Cosart, on the mound.

The (non-alcoholic) bottles that the BlueClaws had on ice, ready to be popped, will have to wait another day at least. No playoff trips were locked on Saturday, as Kannapolis came out on top and Hickory knocked off Greenville, which dropped Lakewood's lead in the division to just 1 game. The BlueClaws have already clinched at least a tie for the Northern Division lead. The best that the Hickory Crawdads can do is tie the BlueClaws after tomorrow's games are played. An even finish would result in a one game tie breaker. That deciding game would be the first time the two teams will meet this season, on August 25th in Hickory. 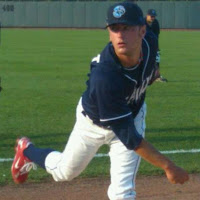 Cosart, who entered the game with a 7-1 record and a 3.25 ERA, let up 2 runs early as the first two Intimidators batters of the game reached base on singles and later scored. Lakewood took a 3-2 lead in the 3rd inning when Jiwan James drove home Adam Buschini with a single and, after a Jonathan Villar walk, Leandro Castro drove home both Alan Schoenberger and James on a 1-out single.

The score remained the same until the 6th inning when Cosart ran into trouble. Daniel Wagner led off the inning with a single and was moved to 2nd on a sacrifice. Center fielder Kyle Colligan then tied the game with an RBI single. The damage in the 6th was not done as lefty hitting outfielder Nick Ciolli jacked a huge opposite field 2-run homerun off Cosart, to give Kannapolis a 5-3 lead.

Lakewood threatened in the 7th inning as Castro smashed a 1-out triple off of reliever Zach Piccola. "The Boss" Jonathan Singleton plated Castro on a sacrifice fly. The BlueClaws missed another opportunity in the 8th inning when Adam Buschini reached on a hit and stole second, but was left stranded there when JR Ballinger struck out Alan Schoenberger. Lakewood failed to plate any more runners, as Kannapolis starter Justin Collup earned the win.

The difficulties for Cosart were something that manager Mark Parent attributed to his inexperience and his age. "He's 19 years old and instead of being able to relax and use his best stuff, in and out, he got away from it and he threw too many change ups. We had this problem, probably 2 games ago." Parent said, already familiar with Cosart's tendencies to not rely on his 95-97 mph fastball that has made him a darling in the Phillies' system.

Parent added, "Jarred gave us all he had, he's just young and sometimes his pitch selection is an issue."

Cosart followed up the 3-run 6th inning with a one-two-three 7th inning. Parent spoke of the overall importance of letting Cosart come back out, even though relief pitcher Luke Wertz was ready to enter the game. "We want to win, right? But I need Jarred Cosart to go back out there and finish on a high note...for the long run."

Cosart was, in fact, on a lower pitch count than normal, as he exceeded the usual 100 pitch limit in his previous start. Wertz was ready in case Cosart didn't bounce back with a quick inning.

In the end, Parent is still confident in the team and knows that there's plenty of baseball left, no matter how Sunday's results go. "My job is to keep these guys competing after tomorrow even if we do win," Parent said. "We want to win the first half, that's what we're supposed to do as a team. And if we do that, then we've succeeded, but then there's a whole other half. We just don't (crap) it away, we gotta keep playing."