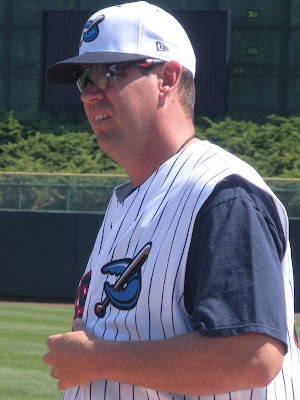 Steve Schrenk is currently the pitching coach for the Phillies' A-Level affiliate, the Lakewood BlueClaws. In his playing days, Schrenk was drafted by the White Sox in 1987. He pitched two seasons with the Phillies in 1999 and 2000. After retiring as a player in 2002, Schrenk coached a summer college team in 2003. He joined the Phillies organization as a coach in 2004 and has been with the Phillies, coaching at different levels, since then.
Last week, PhoulBallz.com had a chance to speak with Steve Schrenk and that interview lies ahead.


What are your thoughts on the solid efforts from the Lakewood pitching staff and some of the injuries the staff has had to deal with so far this season?

Everybody's been doing a pretty good job. We've had our ups and downs, a little bit here and there. They're young and we're still learning how to pitch and do some different things. We've had the injuries that have hurt us a little bit here and there, but the guys who are here- (Nick) Hernandez, (Brody) Colvin and (Jarred) Cosart- they've all been throwing pretty well. Pettibone also before he got hurt. So, like I said- they're young. We've got three high school kids (players drafted out of high school), two college guys...and they've held their own. We've been doing better and getting better.


With guys putting forth positive showings for more frequently than poor ones, does that make your job easier?

Well, yeah, of course it does. It always makes it easier when they're doing better. But they're still learning. We've got a long way to go and that's why we're here at this level. I don't always look at results, sometimes I look at how they're making pitches. Sometimes you can't control wins and losses and stuff like that, but they've been going deeper into goes, giving our team a chance. We've got some new guys stepping up now, with (Colby) Shreve and (Julio) Rodriguez, so they're both young too, so we'll see what happens. It's a joy to watch them get better every day.


Have you been surprised by the amount any of your players has improved thus far?

No, I wouldn't say that at all. No one has improved so much they've surprised me. I kind of expected all of our starters to do well. I know there was going to be some down time too, but they've bounced back from it. Even Colvin, I think he lost his first three games. He's got 3 wins now. Not that you can put a whole lot on wins and losses, but got 6-7 innings in his most recent starts, so that's an improvement.


Which guys on the Lakewood pitching staff are you quite confident could have plenty of success at higher levels?

I'm confident all of them could. You know what I mean? That's what we want for all of them. Time will tell...the hitters will let you know, the league will let you know. You want them all to do well. I think the 5 starters here have proven they can pitch here. They're doing a good job and we'll see how it plays out. We haven't even seen some of the teams in our league yet. it'll be interesting to see how they make adjustments.


How much credit goes to the catchers, Sebastian Valle, Kyle Lafrenz and Torre Langley, when the pitchers are stringing together a lot of success?


What went into the decision to realign the pitching coaches in the Phillies' minor league system over last off-season?

There wasn't, really, a whole lot of discussion about it. They make changes, they do things, they move people around sometimes. I'm here with some young kids with good arms in our organization, so I'm happy.


It seemed like you may have followed one group of guys upward in the system and perhaps now you're starting over at A-level, with a new batch of young pitchers. Do you feel like that could be the case?

Yeah, that always goes through the back of your mind a little bit, but that's part of being in the minor leagues too...developing guys and making them better. Yeah, I took those guys and won a couple championships and done some things and here I am again and I'm enjoying it and I love working with the young kids too. The higher levels are fun, don't get me wrong, but it's neat to see these kids grow and progress. And that's the path that I'm on and that's my job...making them get better.


Speaking of the progression, of the guys you've coached and have moved upward, is there anyone after your first impressions that you are most impressed with how far they've gotten?

(Yohan) Flande I had a little bit. (Mike) Stutes, (Vance) Worley...I mean there are quite a few guys. It's rewarding. (Scott) Mathieson, (Mike) Zagurski, the list goes on and on- (Matt) Maloney, (Josh) Outman, even guys we've traded. We've won a World Series and a National League championship and making those guys better and getting the guys we got, you don't get quality pitchers if you don't get rid of quality pitchers, so it has worked out nice.


How would you describe the atmosphere with the team right now?

It's good. It's fun. Our manager, Mark Parent, I love working with him. He was a catcher, so we've got the pitcher-catcher combination going here a little bit and we get along well. We're both learning, he's learning, I'm learning, so it's been good. I'm just glad to be here with him and I think it's his second year coaching in pro ball. The atmosphere with the team so far is good. We have fun but we work hard.


I wanted to ask you about Josh Zeid, whose recent struggles have gotten him removed from the closer role out of the Lakewood bullpen. He seems to struggle when he gets ahead of batters. Do you think that sort of thing will be addressed specifically, or is that something he will work through on his own?

Ya know, over the first month of the season, he didn't give up a run. He was pretty lights out. He's making some mistakes ahead in the count, yeah. Obviously, we've talked about it. I don't want to dwell on it, 'cause it's- I don't want to ever tell a guy not to be aggressive. I don't want to start pitching around guys. Can we make better pitches? Yeah? Will he..? Yeah. There's no doubt about it, 'cause he showed me that he could. So, I'm not worried about it at all. He's got a good arm and we'll work some things out. He's gotta stay confident.