By Jay Floyd June 21, 2010
A 16-5 run helped the Lakewood BlueClaws overcome a 4 1/2 game deficit in the standings to the Hickory Crawdads in the Northern Division standings, since May 30th, and win the first half title for the second straight season.

Lakewood led Hickory by a game headed into Sunday's action and needed to win, or for the Crawdads to lose, in order to lock down a spot in the 2010 postseason. Both occurred, as the BlueClaws were led by slugging first baseman "The Boss" Jonathan Singleton and starting pitcher Brody Colvin in a 6-3 defeat of the White Sox affiliate Kannapolis Intimidators and Hickory suffered an 11-8 loss to Greenville. 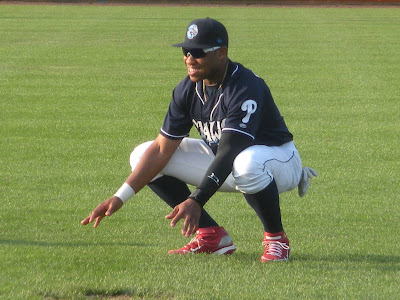 Singleton stretching prior to a game over the weekend
The 18-year-old Singleton gave Lakewood an early 4-1 lead with a 3-run homerun, his 8th of the season, in the first inning. He added a nice cushion for the 'Claws when he smashed his second homer of the game in the 5th inning, putting Lakewood up 6-2 at that point. Singleton's home OPS through 19 games is now 1.200. 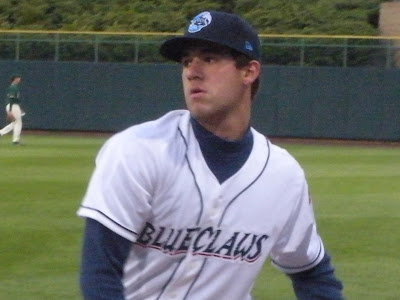 Colvin warming up prior to a game earlier this season

Colvin, a 19-year-old right-hander, struck out 5 batters over 5 innings and allowed just 2 earned runs. The win for Colvin improved his record to 4-6. His season ERA also saw an upgrade to 4.48. In his last 7 starts, Colvin has posted a 1.82 ERA.

For the BlueClaws, this will be the third playoff appearance in the team's 10 year history. The previous two times they've competed in the postseason, Lakewood has won the South Atlantic League championship.

The BlueClaws now have 3 scheduled days off, but will send two active All-stars to Greenville for Tuesday night's SAL All-star game. Infielder Jonathan Villar and relief pitcher Josh Zeid will be on the Northern Division roster, while two other BlueClaw All-stars will not play due to injury. Lefty pitcher Nick Hernandez, who was placed on the disabled list in May with shoulder weakness will miss the game along with infielder Jeremy Barnes, who was injured this past week during batting practice, when a batted ball took a funny hop and struck Barnes in the nose as he attempted to field it.

Roster moves are expected as the second half of the minor league season begins this week. A pair of older BlueClaws who are rumored to be in line for a promotion to Advanced A-Level Clearwater are 24-year-old closer Jordan Ellis, who has a 2.75 ERA and 43 strike outs in 36 innings pitched this year, and 23-year-old starter Matt Way, who is 4-0 and has a 1.31 ERA over his last 5 starts.