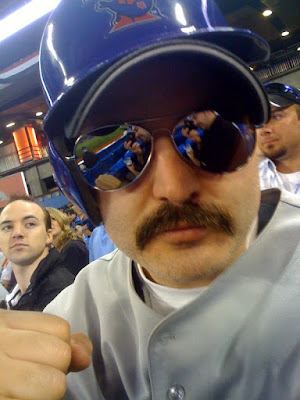 A brief introduction is in order. Hello to all of you PhoulBallz.com phaithful! My name is The Man With The Golden Arm, head man at 1BlueJaysWay, and I am a living, breathing, eating, sleeping baseball phan in Canada. Now I know most of you will be shocked to hear that and I'm sure you thought guys like me were mythical like unicorns.....but it's true. I'll take baseball over hockey any day of the week and twice on Sunday.

That being said, I realize that I am in the minority in my native land. And believe me, I hear about it weekly. You see, I can't turn it off. Blue Jays baseball has been and will be a major part of my life until one of two things happen:

When Jay Ballz asked me for a few thoughts regarding the upcoming Blue Jays / Phillies series, I pondered it for a couple of days. This ordeal of Roy Halladay's return series being moved to Philadelphia has brought on a complete range of emotions for me. I was excited, scared, happy, sad, angry, embarrassed and everything in between depending on where we were in the process. To put it into perspective for you guys, it was 3 and a half months before I could even talk about Roy Halladay being traded. This is what I came up with.

To say that I was looking forward to seeing him pitch again is a bit of an understatement.

However, right now I'm not so sure. Seeing him with another team would be like seeing your ex girlfriend with another man. I know Doc would be well received here in Toronto, but I can honestly say this here and now: I was hoping to see the Blue Jays knock the hell out of him. You see, I have come to realize that no matter what, the team is more important than its players. Even the best players. Even the phan favorites. Trading away a future Hall of Famer kinda forces you to do just that.

Here is a quote from young lefty pitcher Ricky Romero shortly after Doc threw his perfect game for you. It pretty much sums up my current state of mind:

“There was a guy here that did it really, really well,” Romero said. “You try to learn from that.”
But instead of reminiscing about the Halladay era, Romero reminded reporters of the new reality in Toronto: Halladay wears a different uniform and could face the Jays when Toronto plays the Phillies in late June. So, while Romero had plenty of praise for Halladay, he’s also prepared to face his former teammate. “I’m sure everyone in here is happy for Doc, but we’ve got to take care of our business,” he said. “He’s our enemy now.”

In conclusion, I hope you all enjoy the extra three "home games" for your Phillies this weekend. I know it will be odd to see your team hit first and with that stupid Designated Hitter rule in your park. A fitting end to a total screw up by all parties involved. Toronto folks get the G20 and Philadelphia phans get our home games. In my eyes, we can call the whole Joe Carter walk-off home run to win the World Series thing even now. ;)

Total low blow, I know. But I'm not even gonna pretend like I'm sorry.

Stop by the site sometime and say hello won't ya? Or stay in touch via the twitter.

Ian Hunter said…
Good to see that Romero has his game face on, but deep down I think he (and the rest of the Jays) miss Doc. But it would be a shame to see them get all sentimental before battle.