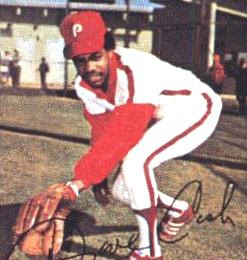 Dave Cash was a second baseman for the Phillies from 1974-1976. Cash initially debuted with Pittsburgh, replacing Pirates icon Bill Mazeroski, and helped them advance to 3 consecutive postseasons. The Phillies front office acquired Cash, when they overhauled much of the team, in an effort to upgrade the offensive output at the second base position as well as add leadership in the clubhouse. Cash quickly proved to be a smart addition.

In 1974 Cash became an all-star for the first time, with the Phillies. He played in all 162 games and laced 206 total hits that season. Cash excelled in the field as well, leading the league in total chances, turning more double plays than any other National League second baseman and finishing 2nd in Gold Glove Award balloting.

Cash's contributions on the field came in second to his efforts boosting the team's morale. He is credited with helping turn the Phillies' fortunes around and getting the franchise on the winning track. He coined the phrase "Yes We Can" as the Phillies' rally cry. Cash also is said to have taken a young infielder named Mike Schmidt under his wing, to help him adapt to the Major League level. Schmidt was a player with all the tools, but he lacked confidence. Cash helped Schmidt focus and become a player that others would eventually look to for leadership.

Cash earned a third straight all-star nod in 1976, when he led the league in triples with 12. Despite that and the fact that Cash helped end the Phillies' 26-year playoff drought, the team chose not to re-sign him and Cash left as a free agent.

The Expos signed Cash and he played with Montreal for 3 seasons and later one year with San Diego. Cash retired from playing in 1981 but stayed in the game as a coach for minor league and independent clubs, even spending a season as the first base coach for the Baltimore Orioles.