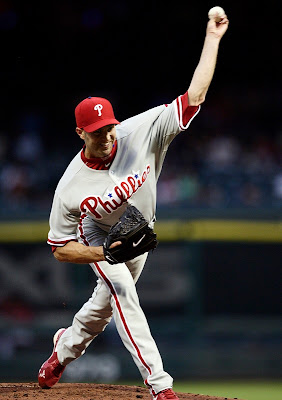 "Jay" Happ will continue his minor league rehab work with the Triple-A Lehigh Valley IronPigs this coming Tuesday. The lefty hurler had his latest rehab outing for Double-A Reading on Wednesday night. Happ surrendered 3 runs over 5 innings and struck out 4 while walking no one. Velocity had been a concern, but Happ's arm strength appears to be building, the more he pitches, and velocity is returning. Happ, who has been sidelined since April with a forearm strain, is likely to be ready to return to the big leagues shortly after his next start, if things go well.

Chad Durbin, who strained his hamstring fielding a ground ball in the 9th inning of Wednesday night's game, was placed on the disabled list today. Nelson Figueroa was called up from Triple-A Lehigh Valley to take his spot on the roster. Manager Charlie Manuel described Durbin's ailment as "pretty serious", but initial impressions are that Durbin may not require longer than 15-days to recover.

Ryan Madson is scheduled to travel to Clearwater, FL tonight in order to begin rehab work. Madson has pitched from the mound this week and has taken part in pitchers fielding practice. Madson is slated to begin his rehab work with a game appearance for the High A-Level Clearwater Threshers on Sunday.

Greg Dobbs, who was designated for assignment by the Phillies on Tuesday, has accepted an assignment to Triple-A Lehigh Valley. Dobbs will report Friday, and some minor league roster moves will be made accordingly.

The Phillies' new backup catcher Dane Sardinha hit his first Major League homerun in the 6th inning of Thursdays match up with the Indians. The 31-year-old Sardinha had a homer and 5 RBI in 9 spring games with the big league Phils in spring training this year. Sardinha was called up this week when Carlos Ruiz was placed on the disable list with a concussion. Dane, a Hawaii native, has a brother, Bronson, who catches for Colorado's Double-A team, the Tulsa Drillers. Dane and Bronson have another brother, Duke, who played in the Colorado system as well, from 2002-2008.

The Phillies have come to an agreement with their third round draft selection, Cameron Rupp. A catcher for the Texas Longhorns this season, Rupp batted .304 with 10 homers. He is expected to report to short season Williamsport on Friday. The Williamsport Crosscutters, who started their season last week, are 4-2 thus far and are being led by 17-year-old outfielder Domingo Santana, who is batting .474 with a double and 2 homeruns through 6 games. Santana began 2010 with A-Level Lakewood, but batted just .182 through 49 games.
_____________________________________