Eric B Needs to be Cut (and My Name is Rakim) 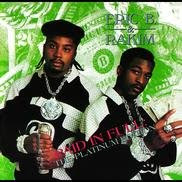 While the Phillies are on a hot streak this month, one player on the team is not. Eric Bruntlett is 1-for-12 in July. Since the start of May, Bruntlett's apex in batting average has been .167 on June 14th. Bruntlett's ineptitude can be tolerated no longer. Get rid of this guy NOW!

Eric B. is the 2009 Endy Chavez. Remember Endy...the guy who in 2005 managed just 2 hits in his final 42 games played as a Phillie? That is about the sort of output the Phillies are getting from Bruntlett, and it's time to fix this void.

Julio Lugo was designated for assignment last week by the Red Sox and is expected to become a free agent. The Metropolitans are rumored to be interested. Why wouldn't the Phillies be interested in a guy who could surely outhit Bruntlett? Lugo was hitting .284 through 37 games played this season with Boston.

Suspended Lehigh Valley IronPig Pablo Ozuna is eligible to return next Wednesday. Ozuna is batting .294 through 51 games at triple A. Miguel Cairo is also still hanging around with the IronPigs and is batting .300 through 55 games played there. Perhaps either player could outperform Bruntlett, at this stage.
Another option in the system is the Reading Phillies' all star third baseman Neil Sellers. Might the ML Phils be doubtful in Cairo, because he had a shot already, and be hesitant to promote Ozuna after his drug suspension, and possibly get beaten to the punch on Lugo? Well, Reading manager Steve Roadcap thinks Neil Sellers could perform at higher levels. The righty hitting 27-year-old Sellers is batting .316 over 93 games played this season at double A.

More ideas to replace Eric B. are welcome. Please forward them to the Phillies' front office.

The fact that this guy, who is batting .128 through 50 games played, got to score key runs in the post season last year bothers me to no end. Imagine if Endy Chavez was immortalized in Phillies history by scoring game winning runs in the World Series. Yeah, that's Eric Bruntlett.

Today marks the one year anniversary of Joe Blanton's Phillies debut against the Metropolitans.

Zach Collier made his season debut with Class A short season Williamsport on Tuesday, after being sent down this week, and went 0-for-4 in his journey to finally slug his first professional homerun.
Lakewood catcher Travis D'Arnaud is hitting .400 (18-for-45) in his last 10 games with 7 doubles, a homer, 7 RBI and 12 runs scored.
Wednesdays are always PhoulBallz Phillies days on Fox Sports 1310's The Shore Sports Report. The show is on daily from 3-6pm and you should be checking it out. I'll be on at 3:30pm today.

GM-Carson said…
Great minds think alike. I posted this on my blog this morning- Thanks to my Baseball Reference subscription I was able to crunch numbers and discover Eric Bruntlett's .395 OPS is the 9th worst this decade by a player with 90+ plate appearances. It's the 109th worst since 1901. Release him!!!
July 22, 2009 at 8:43 AM

Jay Floyd said…
I am rocking the big "Steve Carlton" today, my man.

whiteout said…
Dang it the Phils lost. Well they had to lose sometime. Hey everyone please check me out and comment
July 22, 2009 at 6:56 PM