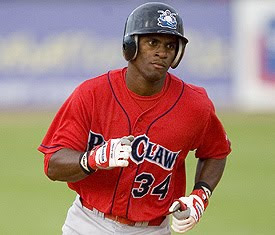 Harold Garcia is establishing himself as a solid prospect in the Phillies' system and, in the process, has locked up a place in the High-A level Clearwater Threshers' record book. Monday night against the Dunedin Blue Jays, Garcia extended his hitting streak to 31 consecutive games, when he slammed a triple in the 4th inning off of Philadelphia native Frank Gailey. Clearwater won the game, 7-3.

The 23-year-old Garcia extended his streak to 32 games with a hit in Tuesday's game against Dunedin. The switch hitting second baseman was safe on a bunt hit off of pitcher Chad Jenkins.

Garcia, who helped the Lakewood BlueClaws win the 2009 South Atlantic League championship, is batting .340 through 40 games this season. Garcia has had 14 multi-hit games during his record streak and has only gone hitless twice this season.

Clearwater faces Dunedin again at noon on Wednesday and Garcia will hope to extend his streak to 33 games.

The previous record was held by outfield prospect Quintin Berry, who hit in 30 straight games for the Threshers in 2008.