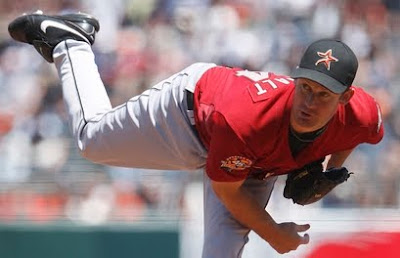 A report from Yahoo! Sports states that Astros hurler Roy Oswalt has named 3 different teams he'd like to land with if Houston decides to trade him this season. On Oswalt's short list were the Phillies, the Cardinals and the Yankees. Oswalt, who has a career 140-77 record with a 3.21 ERA and is in his 10th Major League season with Houston, could join "Mr. Perfect" Roy Halladay in the Phillies' starting rotation.
This sort of news should make the hardcore guys over at The 701 Level very happy, as they declared their desire to have TWO ROY'S in the Phillies' starting rotation a couple weeks back.

Keep in mind that Ed Wade, general manager of the Astros, is very familiar with the entire Phillies organization. Wade has put together a collection of ex-Phillies during his time there, including guys like Brett Myers, Pedro Feliz, Jason Michaels and Mike Bourn. So, perhaps working out a deal to send Houston some more Phillies cast-offs might not be very difficult for Phillies GM Ruben Amaro Jr.

For folks that follow the Phillies and might feel like the cupboard is bare, as far as trade-able prospects go, don't you fret none. The Phillies are deep with minor league talent that could translate into a quality mid-season acquisition. As Phils minor league pitching coach Steve Schrenk told PhoulBallz.com in an exclusive interview recently, "You don't get quality pitchers if you don't get rid of quality pitchers." And the Phillies' system happens to be loaded with promising young arms.

Jarred Cosart, for example, could be this year's Jason Knapp, who was key in the package that got Cliff Lee in return, for the Phillies, last July. Cosart, who regularly throws a 97 mph fastball and just turned 20-years-old, is 6-1 with a 3.38 ERA and has held opponents to a .201 avg. through 10 starts with A-Level Lakewood thus far in 2010. Additionally, Cosart has struck out 60 batters in 50 2/3 innings. Other shining young pitchers include Justin De Fratus, who has a 1-0 record, 10 saves and a 2.05 ERA in 19 outings for High-A Level Clearwater this season...Trevor May, who has a 3-4 record with a 4.98 ERA and 65 K's in 43 1/3 innings pitched...Yohan Flande, who has a 3-4 record, 2.85 ERA and only 2 homers allowed in 60 innings pitched for Double A Reading...Scott Mathieson, who is 2-1 with 8 saves and a 1.46 ERA through 20 games at Triple-A Lehigh Valley...BJ Rosenberg who has missed some time early this season with injuries, but posted a 7-3 record, 22 saves and a 1.18 ERA in 47 games at 2 levels in the minors last season...Nick Hernandez, who has a 3-1 record with a 1.61 ERA through 8 starts this year...and plenty more. All that goes without mentioning hot minor league batters like Jonathan Singleton and Cody Overbeck who might draw some interest.
Also a hot rumor around MLB today is that current Orioles starting pitcher Kevin Millwood is open to joining the Metropolitans. Millwood has pitched better than his 0-5 record would indicate. With a 3.89 overal ERA this season, the reason for being without a win at the point is that Millwood is on the Orioles, not because he was pitched poorly.

As the trading blocks and playoff pictures begin to take shape, many more players will become available and the rivalries that are already pretty hot, especially in the NL East, could reach the stop, drop and roll point.

Click all the linked names, within the article, for exclusive interviews with each player.