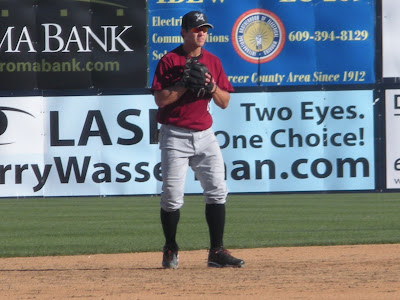 The D'Arnaud brothers, Chase and Travis, have been in opposing dugouts since they graduated little league. They attended rival high schools and then they were pitted against one another in the minors, when different Pennsylvania teams drafted each of them. Travis was selected by the Phillies as a supplemental 1st round pick in 2007 and Chase was picked by the Pirates in the 4th round of the 2008 amateur draft.
Regular PhoulBallz readers should be familiar with Travis (interviews here and here), the former Phillies prospect, who was among the minor leaguers traded to the Blue Jays for Roy Halladay last December. However, we've not heard from Chase, the Pirates shortstop prospect, here, until now.
Dating back to their youth, Chase and Travis have played for rival teams. During their teenage years in California, Chase attended Los Alamitos High School and Travis attended Lakewood High School. In Chase's first pro season, the brothers faced each other in the NY-Penn League, when Chase played for State College and Travis played for Williamsport. Even last season, with Chase playing for the West Virginia Power in the South Atlantic League and Travis the starting catcher for the eventual league champion Lakewood BlueClaws, they were matched up quite a bit, including a stretch in May when their father, Lance, made a trip to see his sons play each other when the Power and BlueClaws met in Charleston and Lakewood in consecutive weeks.

Chase considers the rivalry toned down since high school, when things were more aggressive and competitive. Now, he says, it's more enjoyable. "It's a lot more fun right now, 'cause we're both just working on our games and getting better." Chase added, of Travis, "It's exciting watching him play."

These days, the D'Arnaud brothers compete in different leagues. Chase plays for the Altoona Curve in the Double A level Eastern League, while Travis catches for the Dunedin Blue Jays in the High A level Florida State League. Chase is batting .238 overall in 60 games this season.
The 23-year-old Chase, who had successful and unsuccessful stolen bases attempts against his brother last season in the South Atlantic League, speaks highly of Travis. "He's a great catcher and he's got a great arm," Chase said, but added some swagger by asserting his confidence on the bases against his younger brother. "He's great defensively, but I gotta show up little brother whenever I have the chance to."
The brothers speak regularly about meeting up, as opponents, as they both progress upward in the baseball ranks. Chase anticipates Travis getting a mid-season promotion to Toronto's Double-A affiliate, New Hampshire, and hopes they get to face off later this year. Chase feels that they each pick up their game when facing one another. "It's always fun," Chase said. "Usually, we both do really well, when we play each other."
The D'Arnaud brothers also rely on each other for support when the rigors of a long season take their toll and slumps prevail. "It's very convenient having a brother who's also doing well in the game, because whenever I'm struggling, I can go to him for help. And whenever he's struggling, he can come to me for help," Chase said. "We just feed off each other."
Altoona and New Hampshire face off just once more on the regular season schedule, in Altoona, August 13th-15th. It remains to be seen if 2010 will see another Clash of the D'Arnauds, but if 21-year-old Travis continues on his current pace (.284 avg., 5 HR, 27 RBI in 38 games), it's not absurd to expect this brotherly broil to reignite this season.
________________________________