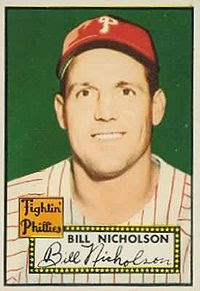 Nicknamed "Swish" because of his free-swinging style, Nicholson became a 5-time all-star in his 10 seasons with the Chicago Cubs. He also hit over 20 homers in six different seasons during that same stretch playing with Chicago. Turned down for military service because he was color blind, Nicholson would dine well on war time hurlers. In 1943 and 1944, Nicholson led the National League in homeruns and RBI, finishing second in league MVP voting in 1944, when he also led the league in runs scored with 116 and batted .287. Nicholson fell just 2 voting points short of winning the award, when the Cardinals' Marty Marion took home the honor mainly for his defense, as Marion's offensive numbers (.267 avg., 50 runs, 6 HR, 63 RBI) did not compare to Nicholson's.

In that 1944 season, Nicholson hit 4 homeruns in a game against the Giants at the Polo Grounds. He came up to bat a fifth time and the Giants intentionally walked him, despite the fact that the bases were loaded with Cubs runners at the time. Forcing in just one run better protected the Giants' 3-run lead at that time. Nicholson is one of six men credited with receiving a bases loaded walk in MLB. The others are Abner Dalrymple (1881), Nap Lajoie (1901), Del Bissonette (1928), Barry Bonds (1998) and Josh Hamilton (2008).

With the Phillies, Nicholson served as the team's fourth outfielder, backing up the Whiz Kids group of Richie Ashburn, Dick Sisler and Del Ennis. In 1950, Nicholson twice hit game winning homeruns against the Dodgers to help the Phillies lock down a series in early July. Late that season, however, Nicholson fell ill and doctors discovered that he was diabetic, which caused him to sit out the World Series.

Swish Nicholson played through the 1953 season as a reserve with the Phillies and then retired from baseball.

Joe P.57 said…
There is a great biography of Nicholson, published by McFarland & Co. It's called "'Swish' Nicholson, a Biography of Wartime Baseball's Greatest Slugger," available at www.amazon.com
July 22, 2010 at 11:02 AM