Castoffs in the Bay 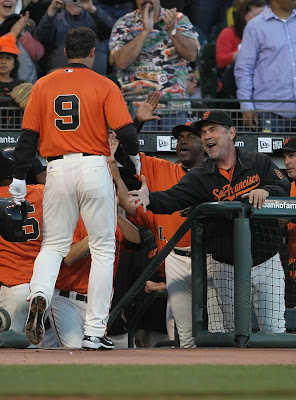 Pat Burrell in 7 games with his new club, the San Francisco Giants, has contributed with a .333 batting average. Burrell, who could never quite excel with his previous team the Tampa Bay Rays, has driven in 4 runs and slugged two doubles and a homerun in his short time thus far with San Francisco.
Burrell smashed his first homerun as a Giant on Friday, against former Phillies prospect Gio Gonzalez, of the Athletics. The Giants won the contest 6-2. Gonzalez suffered his 4th loss to San Francisco on Friday, but he also has 6 wins and a 3.79 ERA through 13 starts thus far in 2010.
Burrell's teammate Aaron Rowand is struggling on offense, as he's posted a .223 batting average and .654 OPS this season. Rowand is a .278 career batter and has a career OPS of .782, so surely his 2010 output is far below his typical level of contributions.
Oakland has more players than Gonzalez with Phillies ties. Athletics reliever Brad Ziegler was a 20th round draft selection by the Phillies in 2003, but was released the following year. Ziegler caught on with the Oakland organization later that year and is now a key contributor out of the A's bullpen. So far in 2010, Ziegler has posted a 2-3 record with a 2.70 ERA.
Athletics starting pitcher Josh Outman, a former Phillies farm hand, is still on the road to recovery from Tommy John surgery. Outman started last season well, with a 4-1 record and a 3.48 ERA in 14 games, but was sidelined when the surgery was deemed necessary. Recently, Outman suffered some setbacks after throwing a simulated game in May. He took a week off from throwing and hopes to be back throwing simulated game action soon, as he continues his rehabiliation work.
Adrian Cardenas, who was sent from the Phillies organization to Oakland, along with Outman, in the Joe Blanton trade in 2008, was demoted to Double-A this week, after struggling with Triple-A level Sacramento (.228 avg, .565 OPS in 31 games). In his return to Double-A Midland on Friday, Cardenas went 2-for-4 with a double and an RBI. Cardenas was the Phillies' first round draft pick in 2006.
Michael Taylor is still with Sacramento, despite his own struggles there this season. Taylor is batting .220 with 2 homers, 26 RBI and a .642 OPS through 41 games with the River Cats. At two levels of the Phillies system last year, Taylor batted .320 with 20 homeruns, 84 RBI, 21 steals and a .944 OPS. Taylor, a 5th round pick in 2007, was sent to Toronto in the Roy Halladay trade over the off-season, and the Blue Jays quickly traded Taylor to Oakland for Brett Wallace.
__________________________________
Follow PhoulBallz.com on Twitter HERE.