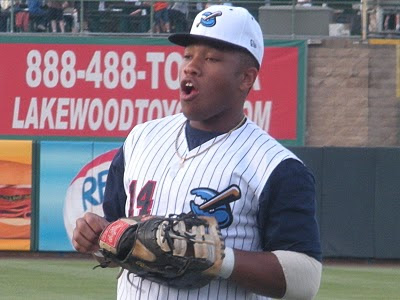 With plenty of excited phans excitedly watching the stats of one of the newest BlueClaws from afar, the player himself is providing plenty of reasons to back up the rapidly growing following. Jonathan Singleton is single-handedly pummeling the reputation that the Phillies' A-Level affiliate's home field, FirstEnergy Park, has as a pitcher-friendly park...or one that South Atlantic League batters have problems hitting the ball out of.

Among the players on the current Lakewood roster, the total number of homeruns hit by the team at home is 7 this season, according to MiLB.com. Jonathan Singleton has 3 of those already! He joined the team in mid-May and, prior to Sunday's contest, has played only 9 home games thus far with the 'Claws.

The 18-year-old Singleton, known around The Shore Sports Network as "The Boss", has quickly drawn comparisons to Ryan Howard, who played in Lakewood in 2002 as a 22-year-old. Howard hit 19 homers in 135 games. Singleton has 6 homeruns for the BlueClaws through 24 games this year. At that pace, those stats projected out to a 135 game season, Singleton would have 33 homeruns.

If you've never been out to FirstEnergy Park to see the BlueClaws, now is the time. And that's the bottom line, because "The Boss" says so. Click here for ticket information.

I know these things are subject to change from A ball to the bigs, but what position is he currently playing?