By Jay Floyd March 02, 2010
The following is my half of the content swap I did last week with Macho Row. The majority of this post appeared over on that site on Friday. I've updated it with details directly from the Phillies about the secondary voting process. Read and vote.

Phans...want to have a say in Phillies' history? Do you feel like you know your team, and the sport, better than most people? Do you feel as though your loyalty through the years qualifies you to weigh in on historic team matters? Now is your chance. The annual Phillies Wall of Fame ballot is available online and voting is underway. The ballot is active through 5pm on Tuesday, March 23rd, so vote!

The ballot, found HERE, lists 12 former Phillies. Some were players, some were managers. Phans are able to vote for three different Phillies alumni and each vote is applied points, based on placement. A first place vote gets 5 points, a second place vote gets 3 points, and a third place vote gets 1 point. Following the deadline, the top 5 point getters will be placed on the official ballot, which will be voted on by the official Wall of Fame Selection Committee, who will determine this year's lone inductee.

Vice President of Alumni Relations, Larry Shenk, told PhoulBallz that, "The Phillies Wall of Fame Selection Committee is composed of 15 persons. It includes Phillies executives, baseball writers both locally and nationally, Phillies historians, one of our broadcasters, someone from Comcast SportsNet, ESPN 950 radio and WIP radio. Sometimes there are changes from one year to another, changes being in the person but not the media outlet." The voting process is the same point process that the phans get, with the committee ranking their top three choices, and, when all voting is complete, the highest point total will indicate this year's inductee.

There are plenty of deserving men on that list, but only three stand out as being most deserving to be officially immortalized in Philadelphia's great baseball history. Induction will occur on August 6th. No more delay...let's get into who deserves your vote.

im Konstanty...A right handed pitcher with the Phils from 1948-1954, Jim won National League MVP Award in the pennant winning 1950 season. That season, he was also an all-star, led the league in saves (22) and set the team record for most innings pitched by a reliever in a season (152) and most wins by a reliever in a season (16). In 1952, Konstanty pitched in relief 40 times and started two games, both of which he completed. In 1953, he completed 7 more games while still performing primarily as a reliever. In parts of seven seasons a Phillie, Konstanty pitched in 314 games, had a 51-39 win-loss record and a 3.64 ERA.
Mike Schmidt and Chuck Klein are the only other retired Phillies who have won the NL Most Valuable Player Award and they are both on the Wall of Fame...why isn't Konstanty?

- Von Hayes...Of the nominated position players, Hayes has hundreds more hits than the nearest nominee. An all-star in 1989, Hayes was a standout player for the Phils for 9 years. In 1,208 career games with the Phillies, Hayes hit 124 homers, stole over 200 bases and had a .274 batting avg. Hayes was also the first player in MLB history to hit two homeruns in the first inning of a game when he pounded the Mets on 6/11/1985.
To me, Hayes is a necessary addition to the Phillies' Wall of Fame. 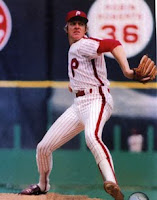 Reed is 5th all-time on the Phillies saves list (90) and 5th all-time in games pitched (458). Also, among Phils' relievers, Reed has the most career wins (54) and innings pitched (763). Most importantly, Reed was a key member of the Phillies throughout their great streak, when they made the postseason 6 times in 8 years from 1976-1983. Reed appeared in 21 post season games with the Phils, posting a 4.15 ERA. From 1976-1979, Reed threw over 100 innings each year, being used primarily as a reliever. In 8 years with Philadelphia, Reed posted a 57-38 win-loss record and a 3.06 ERA.
More than the remaining nominees, Reed holds a place in Phillies history that should be recognized with a permanent spot in Memory Lane at Citizens Bank Park.

Be sure you remember to vote.

Maple bat ban to be implemented at minor league level. Read about it here.

Click this link and read some baseball writers' opinions on whether or not the Phillies will pay up and re-sign Jayson Werth.