Hamilton, a fifth round pick in the 2008 amateur draft, hit .255 in 88 games with Lakewood last season. His .701 OPS for the season was not quite impressive for a first baseman and was never good enough to earn much playing time over starting first baseman Jim Murphy, who was taken 12 rounds after Hamilton in the same draft, and his .860 OPS in 2009.

Ballestas, a Venezuela native, was signed as an amateur free agent in 2004. Last year for the SAL champion BlueClaws he appeared in 18 games (4 starts), posting a 4.98 ERA and striking out 46 batters in 47 innings pitched. 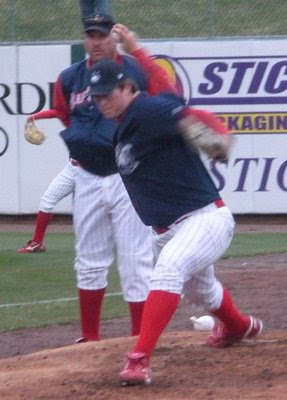 Bergh spent some time closing games for Lakewood in 2009. Bergh posted a 5.05 ERA in 45 games with Lakewood last year. PhoulBallz.com spoke with Ryan in May and that interview can be found by clicking here.
Bisenius made the Phillies' opening day roster in 2007 and was on the big league roster in 2008 when the Phils acquired Joe Blanton, but he was optioned down to make room. Bisenius hasn't returned to the Majors since, as he's dealt with some performance struggles and injuries.

Wilkerson was signed prior to spring training to add some depth at the minor league level. Although not invited to big league camp this spring, Wilkerson did manage to play in a Grapefruit League game with the Phillies this spring and was hitless in his lone at bat. Wilkerson, who was attempting a come back after a previous retirement has reportedly again announced his retirement from baseball following the release.