It's Wednesday, March 3rd and if you didn't know before, I guess you'll know now...today, the exhibition season begins for the Phillies. Spring training games actually started on Tuesday, but since the lone game featured Phillies' division rivals, the Braves and the Metropolitans, it was about as painful to view as a Cannibal Corpse death metal song's imagery. As interesting as seeing Chris Coste in arch enemy colors was, and as grand as the butt smooching Rod Barajas did for Roy Halladay during an interview seemed, I could not have enjoyed watching a baseball game any less. Tonight REAL baseball begins, as the defending National League champions take on the Florida State Seminoles in the prelude to the preseason. No television for this game, but the 2010 Phillies will debut on television on Thursday, when they take on last year's World Series opponent, the Yankees, at 1pm on Comcast Sportsnet.

"Jay" Happ, Phillippe Aumont, Jesus Sanchez and Yohan Flande, among others, are slated to pitch in the FSU game on Wednesday. Happ is the well known runner up for the 2009 Rookie of the Year Award. Aumont is the top pitching prospect acquired in the Cliff Lee trade. Sanchez pitched for the SAL champion Lakewood BlueClaws last season. And Flande was featured in the MLB Futures game and pitched for Clearwater and Reading last season.

One player who will be out of the mix for the game is outfielder Shane Victorino. Shane-O, the two-time Gold Glove winner, has been experiencing some soreness in his shoulder and will sit out as a precautionary measure. The injury is not considered serious at this time. Manager Charlie Manuel prefers that the problem dissipates before using Victorino in a game, even though Shane practiced on Tuesday. Some consideration was given to using Victorino as a designated hitter, but Manuel has chosen to hold off on that idea. DeWayne Wise, Quintin Berry, John Mayberry Jr. and/or Tyson Gillies should see some time in center while Shane is out. 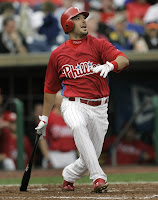 In "Oh, for real?" news...Greg Dobbs has spoken out about needing more playing time. Last week, Dobbs told Scott Lauber of The News Journal that he needs 200 at bats to be productive. Yesss! Oh, yes! That's the sign of a winner...use the guy, whose batting average as a pinch hitter is .173, more! Dobbs also spoke to The Inquirer's Matt Gelb, citing the need for more at bats in order to improve his production. Dobbs stated, "It's tough to put up good numbers if you're not getting at bats. And not that it's an excuse. It's just the way it is." Dobbs was a great guy when he did an interview with PhoulBallz last season, but let's not forget that he missed 4 weeks with a calf injury. That surely took away some plate appearances for the reserve lefty hitter, who set the team record for pinch hits in a season in 2008. Let's also not ignore that guys who produce will get their playing time. Guys who don't produce, don't get, and shouldn't get, as much time on the field.

Allow me to provide an example of what Dobbs would have needed to do in those additional 46 at bats to get his season production to resemble his career numbers. If Dobbs could have added a stretch where he went 13-for-46 with 13 doubles and 11 walks, he would have brought his season OPS to .754, exactly his career mark through the 2008 campaign. Far fetched? Considerably. So, Greg Dobbs...come on, man. Shut down your reasonings and theories and just make something happen.


This has been PhoulBallz.com...sometimes home to telling Major Leaguers to keep it really real.

*UPDATE, time change* It's PhoulBallz Phillies Wednesday. Be sure to tune into the Shore Sports Report each weekday on Fox Sports 1310am and WOBM AM 1160, for the best Jersey sports coverage. I will be on today around 4:05pm talking baseball. Click here for the live web stream.