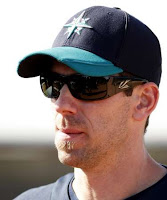 Following a throwing session on Tuesday, Mariners pitcher Cliff Lee is likely to have his abdominal strain result in some time on the shelf. Lee stated that he still feels pain, but that his condition feels better than it did last week. He traveled to Seattle last week to be evaluated by team physicians.

Lee, the former Phillie, is expected to throw from flat ground on Thursday. His status be reevaluated on Friday.

It's a troubling situation for Lee, as he tries to build on a terrific 2009 season in which he excelled with the Phillies throughout the post season. An abdominal injury is the type of ailment that could effect Lee well after he is active on the Mariners roster. While the lingering effects of the abdominal strain may not be to the extent that Phillies phans saw last year, when Brad Lidge's health issues effected his performance for the entire season, it could certainly be the sort of setback that impacts Lee's April. Being unable to pitch and fine tune oneself can only delay a pitcher's preparation for the season.

Lee also suffered a foot injury over the off-season. A combination of nagging injuries should always be a cause for concern, so the Mariners will want to be sure not to push Lee before he is healed.

MLB suspended Lee for the first 5 games of the season for his actions in a game last week, when he threw two pitches at Diamondbacks catcher Chris Snyder. The pitches led to a bench clearing scuffle and Lee was ejected. Lee is currently appealing the suspension. It has been reported that Lee believes his abdominal injury occurred during a collision with Snyder in that game, which precipitated the pitches thrown his way. But suspension or not, Lee is quite likely to miss Seattle's opening day, as the disabled list could be in his near future.