By Jay Floyd March 30, 2010
Monday's talk was all about Jayson Werth. Tuesday's talk is all about the same guy. Yesterday, it was news that Werth had a semi-secret lunch with Yankees legend Reggie Jackson on Friday and then rumors were spreading that this was possibly some early recruiting by the World Champions from New York of Werth, who becomes a free agent after the 2010 season. Today, just as Twitter nearly exploded when Werth debuted his glorious beard this spring, it's about to implode now that Werth has removed the facial growth.

Paul Hagen's article on Monday (found here on Philly.com), connected the dots and pointed out the connections that Jackson has to Werth's family. Hagen explained that Jackson was a teammate of Werth's stepfather, Dennis, from 1979 through 1981 on the Yankees. Also, Werth's mother, Kim, is the sister of Dick Schofield, who played with Jackson from 1983 to 1986 on the Angels.

The New York Post, who originally reported the lunch meeting, stated that the Yankees have denied that Jackson was acting as a representative of the team. Werth told reporters after Sunday's rain out that he has known Jackson since he was a child and that the lunch was just that...two friends having lunch. 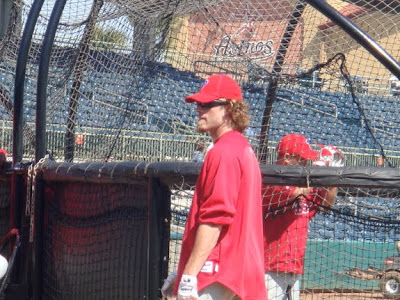 Phans all around the region are nearly heart broken for the second day in a row because of Jayson Werth news, as they learned on Tuesday that they won't be able to see the beard they've come to love, from afar, for the past 5 or 6 weeks of spring training. Werth will bring only his previously familiar chin hair strip north for the on-deck series in Philadelphia this Friday and Saturday.

Stay tuned to PhoulBallz.com for all the latest happenings regarding Jay-Dub.