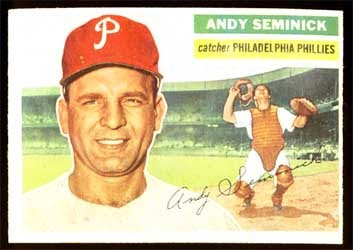 Andy Seminick was a catcher with the Phillies in the 1940's and 1950's. With his contract purchased in September 1943 from Knoxville in the minors, Seminick made his major league debut with the Phils that month and his very first major league hit was a homer.
Seminick spent much of the next two seasons in the minors, but by 1946, Seminick had locked down the job of starting catcher for the Phillies. While he could hit for a bit of power, Seminick's defense was what held him back from becoming a top tier catcher in the National League as he led the league in errors in 1946, 1948 and 1949. However, in 1949, Seminick had his first of back to back 24 HR/68 RBI seasons and became an all-star. Those two seasons coincided with the Phillies' rise in the standings.
A rough and tough backstop, Seminick would never shy away from a confrontation at home plate and would not let injuries hold him out of action. In the closing games of the 1950 season, Seminick was involved in a collision at the plate with the Giants' Monte Irvin at the Polo Grounds. Injured, Seminick did not miss an inning of the 1950 World Series, only to have doctors later announce that his ankle had been broken the whole time.
Following the 1951 season, Seminick was traded to Cincinnati along with Dick Sisler and another pair of players for catcher Smoky Burgess and two more players. Three seasons and 319 games played later, Seminick was returned to Philadelphia with a pair of players for a trio that again included Smoky Burgess.
After playing in quite a reduced role with the Phillies upon his return, he would coach with the team for two seasons before turning to managing in the minor leagues. It was there that Seminick would help develop the next generation of Phillies stars such as Greg Luzinski and Mike Schmidt.
He later became a roving instructor throughout the Phils' minor league system and scouted for the club until he retired in 1986. By the end of his career, Seminick had served the Phillies for nearly 30 years.
----------------------------------------
You can follow PhoulBallz.com on Twitter HERE.