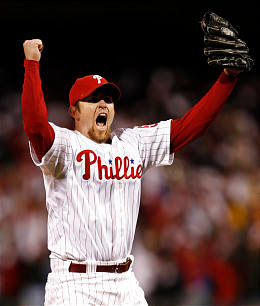 Phillies closer Brad Lidge experienced a set back this week, as he began experiencing soreness in his elbow. Lidge, who had multiple off-season surgeries (elbow & knee procedures) was dealing with inflammation of his elbow and was prescribed a cortisone shot to alleviate the problem.

According to team physician Michael Ciccotti, the current issue is not related to the area that was surgically repair since last season. Dealing with tendinitis, Lidge had surgery on the inner part of his right elbow. The current soreness is on the outer part of the elbow and is reportedly typical for Lidge during spring training.

Lidge's velocity in recent appearances has not topped 90 MPH, which could be attributed to the pesky soreness that he is dealing with.

Ciccotti stated that Lidge has shown no returning issues where the off-season surgeries were performed and that no MRI will be needed to examine the elbow, because there is no structural damage. Ciccotti also told reporters that the estimated target date for Lidge to be activated is still mid-April.

Don't count on having Lidge active for the Phillies by the second week of the season. The best scenario to come of this soreness and treatment could be that it pushes back Lidge's return a few days, as the Phillies will have Lidge resting the elbow this week. Worse scenarios are anything and everything else that could happen.

Two other Phillies that have been dealing with elbow issues are JC Romero and Raul Ibanez. Romero, another Phils reliever who had off-season elbow surgery, is still on target to return in the second week of the season. Romero is scheduled to pitch in a minor league game on Thursday. His velocity has progressed as expected. Ibanez, who was hit by a pitch on the elbow against the Yankees over the weekend, missed a couple days and returned to the Phils lineup Tuesday. The concern with Ibanez remains his performance at the plate. Thus far in Grapefruit League play, Ibanez is 5-for-44 (.114 batting avg. with 1 homerun). Time will tell if the National League's starting left field all-star will bounce back to 2009 form, when he batted .272 and hit 34 homers.

Check me out on the radio talking baseball with Mike & Joe today on The Shore Sports Report around 4:05pm. You can tune in on your radio dial in New Jersey at Fox Sports 1310am and WOBM AM 1160...or check out the show each weekday on the web by clicking this link.

I still think Lidge will be better than alright, and am calling for a year similar to 2008.

If I'm wrong (and I have been with alarming frequency recently), I think the organization has the guts to pull the plug before too much damage is done...
March 31, 2010 at 4:44 PM