After yesterday's game, BJ Rosenberg was sent down to minor league camp following his scoreless inning against the Tigers. Rosenberg spent time as closer for both the single A level Lakewood BlueClaws and the double A Reading Phillies in 2009.
JC Romero threw some batting practice today. Facing live batters, while mixing in his slider is a positive step, but the lefty reliever still is not game ready and appears to be a considerable amount of time behind another rehabbing Phils pitcher, Brad Lidge. There's no doubt, however, that the Phillies and their phans would gladly sacrifice missing Romero for 2-3 weeks, to start the season, if it means he can stay healthy for the remainder of the 2010 campaign. Lidge is scheduled to face minor leaguers on the Phillies' off day tomorrow.
Combined, Cole Hamels and Roy Halladay have put together the following stats this spring- 6 games, 20 2/3 innings pitched, 3 earned runs, 1.31 ERA, 23 strike outs, 5 walks and 11 hits allowed. The only earned runs Hamels has allowed have been on two seperate lead off homers from Toronto's Jose Bautista. If there's ever been a season for Phillies phans to be excited, this is it, because if we add in the Phillies' 4th starter "Jay" Happ's spring stats and the stats of the man who could potentially lock down the 5th starter spot, Kyle Kendrick, those combined numbers look stunningly better- 11 games, 37 2/3 innings pitched, 0.72 ERA! Take it as a warning, NL hitters...this Phillies pitching staff is ready to get all up in that butt like an enema.
The 2009 South Atlantic League champion Lakewood BlueClaws are scheduled to be honored prior to the Phillies home game on Friday in Clearwater, FL. Anthony Gose, Moose Mattair, Justin De Fratus, Trevor May and the gang are all very excited to get their championship rings.
Placido Polanco's status is day-to-day due to his knee sprain. He remains hopeful to be back in the Phillies' lineup by Friday, but manager Charlie Manuel typically prefers to be overcautious, so don't be surprised if Polanco sits out longer than two more days. Initially, Polanco was very worried about the injury, but after further diagnosis, the severity of the injury is more manageable than first thought.
Jamie Moyer, who has pitched strictly "B" games to this point, will make his Grapefruit League debut this Saturday, in Lakeland against the Tigers. Moyer had done well in his first two outings, but struggled in his efforts against the Blue Jays "B" squad that fielded a mostly "A" lineup on Monday when he allowed 5 runs on 8 hits in 3 innings pitched. 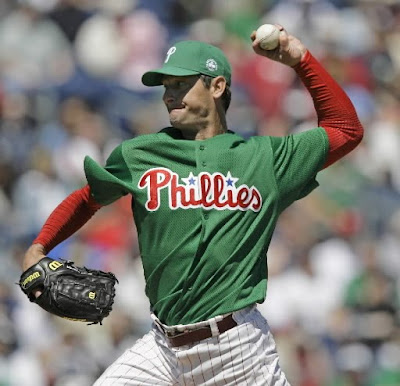 Oh, and happy St. Patricks Day to you.

Don't forget that today is PhoulBallz Phillies Wednesday! Tune in this afternoon during The Shore Sports Report for our weekly segment, talking Phillies baseball. The show can be found on WOBM AM 1160 and Fox Sports 1310 AM, toward the Jersey shore, or on the web via this link. The Shore Sports Report, with Mike & Joe, is on each weekday from 3-6pm. I should be on today around 4:05pm.