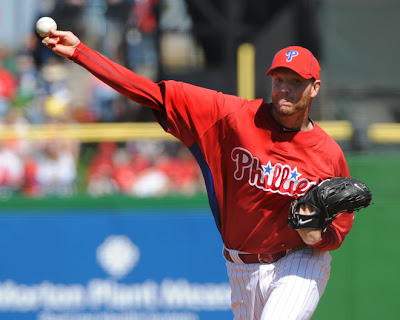 Phillies baseball returned on Thursday and, for the most part, it was all that Phillies phans wanted. The team's big time lefty hitters sat out, as their opponents, the Yankees, had started a tough lefty pitcher CC Sabathia. Aside from that though, the phans of the good guys in Clearwater, Florida left the park having seen a very positive spring debut by the defending National League champions. Roy Halladay's Phillies pitching debut went great. Roy threw 2 innings, striking out 3 while surrendering no walks, no hits and no runs. Halladay threw 21 strikes out of his 24 pitches, showing that his command is in mid-season form. Kyle Kendrick also turned in a solid outing with 2 scoreless innings, allowing only 1 hit and striking out 1.

Jose Contreras and Andrew Carpenter also turned in pairs of scoreless innings. Sergio Escalona was not so lucky. The young lefty followed up 8 shut outs innings, by pulling a '09 Lidge move and blowing the save. But, Sergio quickly went from being on the hook, after surrendering 2 runs on 4 hits, to earning the win, when the Phillies came back in the bottom of the 9th for a walk-off victory.

The rally began with a Brian Bocock single. Paul Hoover then hit a double off Yankees hurler Wilkins Arias that scored pinch runner Quintin Berry to tie the score at 2. Hoover went to 3rd on a throw home and was replaced by pinch runner DeWayne Wise. Wilson Valdez then singled to score Wise and win the game.
BJ Rosenberg was warming up in the bullpen for the Phillies in the 9th inning, in case the game went to extra innings.


Now, let's flip some PhoulBallz around the horn and take a look at early spring training outings from some recently departed Phils.

Brett Myers started for the Astros against the split squad Nationals. Myers gave up 3 runs (2 earned), in 2 innings on 3 walks and a hit while striking out 1. Myers has a 1-2-3 first inning, but ran into trouble in the 2nd. Pedro Feliz had 2 singles in 3 at bats with a run scored for the Astros. Also, Gary Majewski pitched a scoreless inning in relief for the Phils- uh, I mean Astros. Eric Bruntlett did not play in this game for the Nats (he went 1-for-3, a bunt single, in DC's other game against the Marlins). Houston won the contest 15-5. Also of note, Jason Michaels was 3-for-3 with a HR and Mike Bourn was 0-for-3 in that same game.

In the Padres vs. Mariners game there was no Cliff Lee action, but San Diego designated hitter Matt Stairs got things poppin' with a game tying 5th inning homerun. However, the M's went on to win the game 9-3.

Kyle Drabek threw 2 innings in relief for the Blue Jays against Jim Leyland's Tigers and gave up 2 earned runs on 3 hits and 2 walks, and struck out 3. Leyland managed Kyle's dad Doug, when Leyland was the skipper for Pittsburgh in the 90's. Toronto won 9-7.

Speaking of the Blue Jays, they will be the Phillies' opponent for a "B" game on Friday morning in Clearwater. Jamie Moyer is slated to start that game, with Ryan Madson, Chad Durbin and Scott Mathieson also on tap to face some Blue Jays batters. The regular Grapefruit League contest will see Cole Hamels start against Toronto in Dunedin. Also slated to pitch for the Phils in the afternoon game are JC Ramirez, Antonio Bastardo and Ryan Vogelsong.

The Zo Zone has a great update on Ryan Howard's 2009 spring training mashing of the Brighthouse Field press box wall. Check that out here.

Be sure to follow PhoulBallz.com on Twitter HERE for stats, trivia and our exclusive Name That Phillies Autograph game!