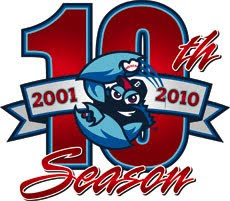 Have you ever wanted to play a role in the history of the Phillies organization? Now may be the time. The Lakewood BlueClaws have placed an opportunity to raise the team's 2009 South Atlantic League Championship banner up for auction. Bidding is open until April 9th and all money raised will be donated to BlueClaws Charities. The non-profit foundation of the Lakewood BlueClaws raised over $150,000 for area organizations in 2009.

"This is going to be a tremendous opportunity for someone," said BlueClaws Assistant General Manager Brandon Marano, who raised the 2006 Championship Banner on Opening Day in 2007. "From personal experience, it's a little nerve-wracking and exciting, but it's truly one of my favorite memories from my nine years here."

Don't forget that today is PhoulBallz Phillies Wednesday on The Shore Sports Report. You can tune in to the show on your radio dial at Fox Sports 1310am and WOBM AM 1160. The program can also be heard online at this link. I will update with a specific time when I have it.