Kendrick Continues to Shine, Moyer's Next 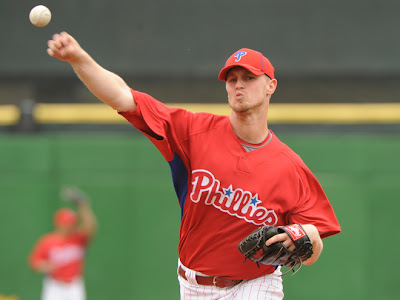 Pucker Up...Kendrick blows sweet kisses to Grapefruit League batters as he shuts them down


Kyle Kendrick has repeatedly performed above expectations this pre-season, as he makes the Phillies' choice for the 5th man in their starting rotation a tough one. Facing the Houston Astros on Thursday, Kendrick threw 5 2/3 innings, allowing one earned run on five hits. While some reports state that Kendrick had a rough time with his command early in the game, you can't argue with results. His spring ERA is a sparkling 1.37 through 5 appearances.

Jamie Moyer, the Phillies' other option for the 5th starter spot is scheduled to pitch Friday evening against the Yankees. Moyer will face off against the newly named 5th starter for the World Champs, former Trenton Thunder stand out Phil Hughes. In four total spring appearances (including his "B" games), Moyer has a 3.86 ERA for the Phils.


Brett Myers started Thursday for the Astros against his former team, the Phillies, but left the game with a mild groin strain. Myers' manager, former Phillies coach Brad Mills is pleased with Myers' progress this spring. "He’s done a real good job,” Mills said. “And the way he’s gone about his business, we couldn’t ask for anything more, and he’s done a great job. Everything is right on cue."