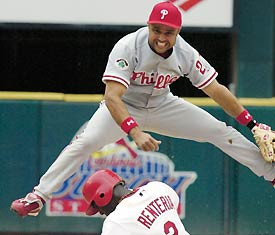 In today's Grapefruit League game against the Pirates, Phillies third baseman Placido Polanco injured his knee, while tracking a pop up in the infield during the 3rd inning. Attempting to catch the ball, Polanco tripped on the pitchers mound, then remained on the ground for a few moments. He was eventually helped off the field by two trainers.

Speaking to reporters a short time later, Polanco was confident that the situation was not as serious as initially thought. Polanco stated, "It's nothing bad. No DL situation or anything. It's probably day to day. It's just the back of the knee. It's probably hyper-extended a little bit."

Polanco's actual diagnosis is a knee sprain. For anyone confusing the terminology, since initial word on the injury was a "strain", to put things simply, the term strain generally references muscles, while sprains are joint related.

Polanco, who won the Gold Glove Award last year while playing second base for the Tigers, has had obvious trouble adjusting to third base. He's had just one mishap that was scored an error, but he's misplayed two other balls that gave the opposing team an extra out in each situation.

The Phillies are expected to rest Polanco for the next two days. The team has a scheduled day off this Thursday, which will provide Polanco with additional rest. Further diagnosis of Polanco's knee will be done tomorrow. It is possible that Polanco could be playing again by the weekend.

Anonymous said…
Hey guys i wish to share with you a way i make $500 every day and i only spend 15 minutes doing it a day! Anyone can do it, you dont NEED to have a website. I strongly suggest you check their website out as there is a brilliant video that explains every thing you have to know. Check them out at [url=http://mobile-mastermind.com/]Mobile Monopoly[/url]. That's the name of the System and i suggest should you own a web site that you at-least go and take a peak, you wont regret it...
January 14, 2011 at 6:54 PM