De Fratus- One of the Big Boys 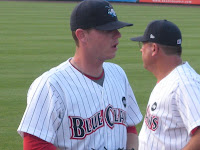 In 2009, Justin De Fratus was an all-star with the A-Level Lakewood BlueClaws. He performed well all season long in varied roles and helped Lakewood win the championship of the South Atlantic League. Since then, the 11th round pick in the 2007 draft has earned recognition by being named the Phillies prospect with the best control, by Baseball America, this off-season. Today, he got to run with the big dogs.

For some time, coaches in the Phillies system have felt that Justin has what it takes to climb the ladder to pitch in the Majors. Last April, I spoke with Bob Milacki, who was then the pitching coach for Lakewood. Milacki listed De Fratus on a short list of Phillies A-Level pitchers who had what it takes to pitch at higher levels. Milcakci also reaffirmed his confidence in Justin in late July when I spoke with him about the same topic. Phils coaches this spring have liked Justin's abilities enough to have him dress with the big club on three previous occasions. His fourth opportunity was the one De Fratus had been hoping for.

With his family listening to his spring Major League debut via iPhone connection, De Fratus threw two scoreless innings against the Blue Jays. De Fratus faced nine total batters...giving up, walking a batter and striking out one.

The taste of the bigs will be brief for now, but De Fratus, who is expected to begin the season with High A-level Clearwater, will certainly be striving even harder now that he's donned a Phillies uniform on the hill. After today's game, De Fratus spoke of his experience with the big club, "It was a ton of fun. This will serve as a nice reminder of what I am working toward."

De Fratus, a California native, thought one of the highlights of his outing was facing a guy he once admired. "It was cool facing Jose Molina, because I watched him as an Angel for so many years", De Fratus said.

Here's hoping that, as a Phillie, De Fratus gets more opportunities to shut down some Major League veterans that he grew up watching.