By Jay Floyd March 08, 2010
When reviewing the MLB Network's Phillies preview on their 30 Clubs in 30 Days program, their version of the All-time Phillies Homegrown team jumped out at me as pretty remarkable. Here's what the squad looked like.
SP- Robin Roberts
C- Bob Boone
1B- Ryan Howard
2B- Ryne Sandberg
3B- Mike Schmidt
SS- Jimmy Rollins
RF- Greg Luzinski
CF- Richie Ashburn
LF- Del Ennis
RP- Ricky Bottalico
Certainly, there are players on that list who are indisputable. Howard, Schmidt, Ashburn and probably Ennis (as I think Chuck Klein does not qualify because he was not drafted by, or originally signed by, the Philadelphia Phillies) have no competition in their respective positions. Ferguson Jenkins, also a Philadelphia product, could be an option at starting pitcher over Roberts, but there is likely no incorrect choice with either one of those. 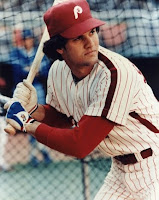 The most debatable assignment on the list is Ryne Sandberg. Aside from the initial displeasure of seeing Sandberg on the list, because he achieved his success with another franchise, the Chicago Cubs, a legitimate argument could be made that Chase Utley is a better choice for that second base spot. A smooth-player-for-real and a friend of PhoulBallz named "OuttaHerrrrreee" on twitter helped spark this debate by pitting these players' stats against each another. Let's target some season averages for the Hall of Famer Sandberg, compared to current Phils second baseman Chase Utley.
Sandberg per season averages based on 15 full years played- 18.8 HR, 70.7 RBI, 87.9 runs, 22.9 SB. Career batting avg- .285. Career OPS- .795.
Utley per season averages based on 6 full seasons played- 26.8 HR, 97.5 RBI, 100.3 runs, 13.8 SB. Career batting avg- .295. Career OPS- .902.
Comparing those stats, the only advantage for Sandberg is the stolen base category. Based on that, I think it's an easy choice to take Utley as the best all-time homegrown second baseman in the Phillies' history. An argument could surely be made, pitting Utley against Sandberg, by inquiring if Utley is a Hall of Famer right now. Probably not, so let the debate commence.

The only alarming thing about the list is that Ricky Bottalico is the best homegrown closer in Phillies history. Ricky Bo is 6th all-time on the Phils' save leader list, but was an all-star in 1996. He saved 30 or more games just twice at the Major League level. Ricky's career stats are respectable with a 33-42 win-loss record, 3.99 ERA and 8.2 K's per 9 inn., but it's just stunning to learn that, in the long history of Phillies baseball, they've never developed another closer better than Ricky Bottalico.
Got any objections or debates of you own on this topic? Leave your thoughts in the comments section.
------------------------
Follow PhoulBallz.com on Twitter HERE!