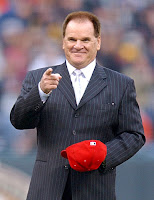 Occasionally, The Sporting News includes a feature called "Since You Asked..." that allows readers to send in questions that are answered by a surprise former or current athlete. In the latest issue of the magazine, a Philadelphia resident named Drew Floyd wrote in, asking if a public campaign, by a forgiving society, could assist in helping Pete Rose gain entry into the National Baseball Hall of Fame. Drew also wondered, "is baseball stuck in its ways?" Rose is banned from baseball for betting on baseball games, while he was the Reds' manager in the 1980's. Drew's inquiry mentioned Mark McGwire's steroid use as an example of the baseball public's pardon. Lucky for the Philadelphian, Drew, his letter was answered by Phillies Hall of Fame third baseman, and Rose's friend, Mike Schmidt.

Schmidt's opinions over the years have fluctuated. Years ago he stated that Mark McGwire would get his vote for the Hall of Fame, if Schmidt had one. Schmidt has openly voiced his displeasure for steroid users who have cheated the game of baseball and its record books. At the same time as those supportive McGwire remarks, he stated that positive-steroid-test getting slugger Rafael Palmeiro would likely miss the Hall in his first year of eligibility, if Schmidt had a say. Now that McGwire is an admitted illegal substance taker, Schmidt has backed off his support of the long suspected cheater.
Previously on PhoulBallz (post found here), we reviewed Schmidt's reaction to McGwire's disclosure about using performance enhancing drugs. It included Schmidt proclaiming that McGwire let a lot of people down. And while Schmidt has somewhat backed off his once adamant advocation of a reinstatement of Rose, he still takes opportunities like this one to present his pro-Pete opinions.

SN's "Since You Asked..." reply from Schmidt, to the reader Drew, includes the following excerpts-
"(Rose's situation) is different than an individual enhancing his own body with a stimulant to increase healing and gain strength. Steroid use has legal ramifications outside of the game, but until recently there was no testing or legislation within the game on which to base a penalty."
"Forgiveness from fans is not the problem for Pete; a pardon and reinstatement by the commissioner is the problem."
"Baseball seems to have decided to put Pete in the cold case file, never to be reopened."
"On the surface it would seem Pete's crime is no worse than Mark McGwire's. If baseball can forgive McGwire and all his contemporaries, why not Pete? Gambling on the game vs. cheating in the game-- one gets you banned for life, the other makes you more famous."

Unfortunately for Rose, gambling became a scandal in baseball following the 1919 World Series, when players fixed the outcome then bet on the series, and baseball deemed gambling to be the worst sin of all. Performance enhancing drugs went virtually ignored for decades and only became a hot topic and a matter for stricter rules and tough enforcement in the past several years. The scandal of the 1919 World Series led to lifetime bans being implemented for any Major League player, coach or manager caught gambling on ML games. Still, as strongly as many fans feel about banned substance usage among baseball stars and how it corrupted the sport, it's very unlikely that the punishments for first time drug offenders will ever equal the initial punishment that gamblers would receive.

If an argument is to be made for simply allowing Rose into the Hall of Fame and not for a full reinstatement, SN reader Drew and his reprieving pals should keep in mind that the ban is like their favorite celebrity backside- full and firm. I'd say baseball is pretty well stuck in its ways, Drew. The life-ban from baseball is for LIFE and since the Baseball Hall of Fame is tied to BASEBALL, Rose just isn't getting in.