Well known Philadelphia Phillies blogger Bill Baer inquired with a dozen or so other Phils bloggers, including myself, about several questions surrounding the upcoming 2010 season for the defending National League champions. Bill's site, CrashburnAlley is always worth checking out, but today's roundtable, that features loads of solid opinions, is can't miss. Here is a direct link to the Phillies preview questionnaire.

Ahead, I've listed some of my answers that did not make the cut in Bill's piece, as he tried to distribute equal exposure for all involved.

How concerned are you about Cole Hamels going into 2010?
I have no great concern about young Colbert for the 2010 season. I've seen and read enough in a few weeks of spring training to know that his off-season conditioning improved his physical state to this point. Half way through spring training he is leaps and bounds beyond where he was half way through even April in 2009. Phillies phans should be confident that Cole Hamels will perform the way the team needs him to this season.

Give the Roy Halladay/Cliff Lee mega-trade between the Phillies, Blue Jays, and Mariners a letter grade and explain your grading process. 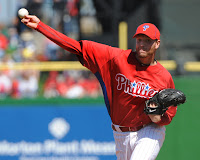 Well, first off, I am unable to speak about these events without clarifying that it was not one mega-trade. There were two different trades. Evaluation of all the events seem to merge together because it's easier for the Phillies, the media and most phans to justify sending away Cliff Lee after the city fell in love with him. I have not seen enough of the trio received from Seattle (Gillies, Aumont, Ramirez) to convince myself that the Seattle trade was beneficial. Lee priced under $10 million for the 2010 season, as he is, would be a bargain for any team. Having met each player and having seen all three prospects dealt in the Halladay trade play, initially Michael Taylor, Kyle Drabek and Travis D'Arnaud were the three players in the system I would have most wanted the Phillies to hang onto. After some review though, it was easier to agree with. Prospects are just that, prospects...so acquiring a man who is often regarded as the best pitcher in the game is no less than an A grade deal. All three players were the types to get parent club phans excited. Taylor and D'Arnaud were easily my favorite players to interview and had the most solid work ethics of all players I'd witnessed behind the scenes. Drabek was certainly talented.
Time will tell what grade the Lee trade merits.
Teams have been approaching Ryan Howard with a steady diet of left-handed pitching and breaking balls and by employing the shift on the right side of the field. Will this trend continue in 2010, or will Howard make the appropriate adjustments?
There is no reason for pitchers and their coaches to change their approach toward handling Howard. It's up to Howard, under the guidance of his own coaches, to make adjustments and beat the shift and those breaking pitches. Howard has never struggled overall, having led the majors in HR and RBI for a stretch of 4 or 5 seasons, so perhaps the urgency to alter his approach just isn't there.

Placido Polanco is making the switch from second base to third base. How good will he be defensively?
Polanco has already struggled with the switch during spring training games. He's been charged with just one error that shows up in the box scores, but he's made at least three other blunders that have been trouble for the Phils. In a recent game he blew a pop up in foul territory, when he misjudged the ball that came back toward the infield and fell foul...and in another game, he took a relaxed approach on a sacrifice attempt and the batter reached base safely. Those are both aside from the trouble Polanco had on Monday, when, while fielding a fair pop up, he tripped over the pitchers mound, injuring his own knee. I see Polanco's difficulties popping up from time to time throughout the entire season, just as Ryan Howard's throwing-to-second base troubles emerge each year.

I see "Jay" Happ avoiding a sophomore slump. He won't keep the ERA under 3, but he'll still have a few complete games and be a contributing force in the rotation. Blanton will have his hiccups in '10, but you won't have that worry with Happ....who should win 14 games and keep the ERA under 3.50.

The Phillies essentially swapped Chan Ho Park for Jose Contreras. Thumbs up or thumbs down and why?
Park won phans over with his efforts in relief. I view Contreras as a guy who won't need a couple of months to win the Philadelphia phaithful over. He'll be solid out of the 'pen from the start and fill the void left by Park nicely. Thumbs up.
Which Phillie(s) is/are we most likely to see dealt by the July 31 trading deadline?
The Phillie I see leaving via trade by the trade deadline is Jamie Moyer. The Phillies will work out a deal with Seattle to allow Moyer to retire as a Mariner. The Phillies will eat most of his remaining salary, and the deal will take place with minimal return.