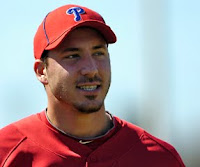 Wednesday night's prelude to the preseason didn't go well for a guy named Phillippe Aumont. The 21-year-old righty, who was the key piece in the group the Phillies got in return from the Mariners for Cliff Lee in December, struggled to get outs against the Florida State baseball team in Clearwater. In just 2/3 of an inning, Aumont surrendered 5 runs on 3 hits and 3 walks.

Pitching coach Rich Dubee spoke to the media after the unfortunate performance by the prospect, and Dubee is not worried. "We’re trying to find his arm slot. (Prior to turning pro) he was lower, and lower with his front side, too," Dubee told reporters. "Those are things he’s trying to put back together. When you do stuff to change it, it takes a while to break those habits." Aumont's arm angle, during his delivery, was altered whle he pitched in the Mariners' system.

As Aumont attempts to restore the desired mechanical formula of his youth, he's not sweating it either. Speaking to reporters before the end of the game, Aumont said with a smile, "I can’t do worse than that. We’re just going to have to build on that, make a joke of it and move on."

In the end, the Phillies won the game 13-6. The contest was stopped early, as both squads ran out of the pitchers they had planned to use.

And for those Phillies phans expecting Aumont to quickly live up to their high expectations, because of the Lee trade, Dubee added, "He doesn’t have to worry about justifying a trade. We made it for a reason – he’s talented...He doesn’t need to be concerned with the trade, he just needs to go out and pitch."

The moral is, folks, that one shaky exhibition outing does not define that trade with Seattle. The 21-year-old prospect has the exact same potential that he had two days ago. Simmer. Down. Now.


Thursday's Grapefruit League opener for the Phils will pit them against last season's World Series opponent, the Yankees. According to several media outlets, including The Sporting News, those same two teams will reach the Fall Classic once again this year, so we could very well be seeing a preview of October when both teams start their ace pitcher against their newest interleague rival. The Phillies will start Roy Halladay and the Yankees will go with CC Sabathia.

The game will be broadcast live on Comcast Sportsnet at 1pm and will be replayed on CSN and MLB Network at 7pm.

Image courtesy of the DelCo Times.

mvr joe said…
So does Roy doing well today validate his signing, or is it only validated when he does well in october? Either way I'm glad baseball is back. Go Phils!
March 4, 2010 at 4:51 PM