PhoulBallz in "The Phield" Tournament 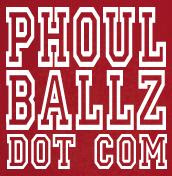 Something huge happened around the Phillies blogosphere on Tuesday evening. Timothy Malcolm, a former regular at PhilliesNation, debuted a 65-blog tournament bracket pitting all the best, worst and everything in between Phillies blogs against each other to determine the King of Philly. The tournament and the site that hosts it are known as The Phield. Check out their site by clicking here.

My very own blog was ranked as a 6 seed, which I may disagree with, but I will refrain from going all Joe Budden on Tim and anyone else who put their efforts into the bracket and site. I respect them, the tournament and the other bloggers and writers involved.

In the first round of the tournament, PhoulBallz.com is pitted up against the 11 seed, a blog called Team to Beat, which should not be confused with a blog, that I must admit was more familiar to me, called We're the Team to Beat, which is competing in another bracket.

Of course, I am writing this to rally all PhoulBallz readers to vote for this site and help it to advance into the next round. Support your friendly neighborhood PhoulBallz. You can view a preview of PhoulBallz's first round match up by clicking HERE. Voting will be done exclusviely on The Phield web site. Thursday's 1st round voting can be done at this link.

Also included in the tournament are big time pages from the likes of The700Level and TheFightins, as well as the blogs of the beat writers like David Murphy's High Cheese and Todd Zolecki's Zo Zone. It's going to be fun all around, but I am crossing my fingers for no first round upsets in my area.

Please vote for all your favorite blogs. As always, I appreciate the support of all my readers. The full bracket can be found here.

Additionally, I would like to go on record with an endorsement and encourage PhoulBallz readers to also vote for Macho Row. Kevin, who recently guest posted here on PhoulBallz, runs a solid site and deserves your votes (against anyone except me). Best wishes and good luck to all teams involved. It's a great concept and hopefully it will increase exposure for everyone, as people discover sites they had previously been unfamiliar with.

**UPDATE** PhoulBallz has advanced to the 2nd round of the tournament. When voting for the next round begins, I will post further details. Thanks to those of you who voted!