Moyer is the Man 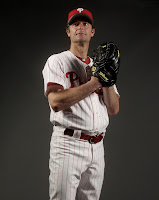 In many folks' opinion, Jamie Moyer pretty much locked up his claim to the Phillies' fifth starter spot on Friday night, when he pitched 6 2/3 shut out innings against the Yankees. Moyer struck out 6 batters and allowed just one hit against a Yankees lineup that included Derek Jeter, Mark Teixeira and Alex Rodriguez.

Moyer has, of course, been battling for the spot in the starting rotation with Kyle Kendrick, who has taken to shadowing new Phils ace Roy Halladay all spring. The impact of Halladay's presence can be seen in Kendrick's pre-season performances, as he has a 1.37 ERA through 5 spring games. Moyer's spring hasn't been much worse. Including his three "B" game starts and 2 Grapefruit League games, Moyer has a 2.61 ERA this spring.

The coaching staff hasn't officially named Moyer to the rotation, but it could already be decided behind the scenes. Moyer has had the advantage throughout spring, based on his experience and his $8.5 million 2010 salary. Manager Charlie Manuel declared the competition was open between Moyer and Kendrick, with token nods to guys like Drew Carpenter as being in the mix also, despite general manager Ruben Amaro Jr. stating multiple times over the off-season that the job was Jamie Moyer's until he lost it. Moyer has not lost it.

It wasn't known what to expect out of the 47-year-old Moyer, who had three surgical procedures over the off-season. But, the veteran lefty, who is the active MLB leader in wins, has pitched well and has impressed many people, including the Phillies, who pretty much have their decision about the pitching rotation made for them, at this point.