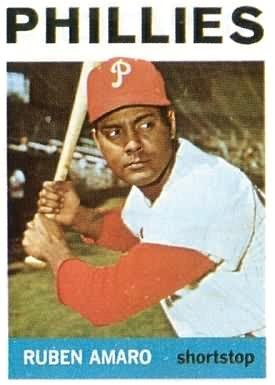 Ruben Amaro Sr. was a Phillies infielder from 1960-1965. Amaro Sr. was a versatile fielder who could play all four infield positions. His father, Santos, had been a solid player in Mexico, but had prohibited Ruben from following in his footsteps. Ruben Sr. ignored his father's wishes, and signed with the St. Louis Cardinals in 1954, prior to being traded to the Phillies organization.

Amaro's skills and fielding range impressed manager Gene Mauch, who raved about his abilities to reach batted balls that other shortstops could not get to. In 1961, Amaro was the Phillies' everyday shortstop and batted. 257 with 1 homerun, 32 RBI and a .700 OPS. The next season, however, Amaro missed half the season serving in the Army reserves and lost his starting gig to Bobby Wine. As a result, Amaro began rotating around the Philadelphia infield, over the next couple seasons.

Amaro had little power at the plate, but managed to reach his single season career high in homeruns in 1964. That same season, he won a Gold Glove award at the shortstop position, while playing just 79 games there. Ruben was still seeing loads of playing time elsewhere and added in 58 games at first base, 3 games at second base, 3 games at third base, and 1 game in leftfield during his Gold Glove shortstop season.

In 3 season with the Yankees, Amaro Sr. batted .214 in 191 games. 1969 was Amaro's last in the majors. He spent that season playing with the California Angels.