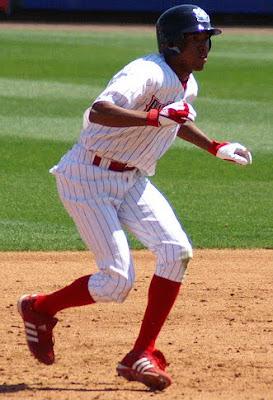 D'Arby Myers is a Phillies outfield prospect that currently plays for the Class A Level Lakewood BlueClaws. D'Arby spent much of this season on the bench for the 'Claws. He began the season as the starting left fielder, but lost playing time when Steve Susdorf came through town, as Myers' batting average was suffering. Myers, however, would bounce back and win his starting spot back by season's end. He finished the regular season with a .270 average in 83 games (he batted .296 in 26 games, after July). Still just 20 years old, the 4th round 2006 draft pick still hopes he can rise through the ranks of the Phillies' system. I spoke with D'Arby prior to the BlueClaws leaving for Greenville to try and lock down their second ever SAL Championship tonight. Here's how that went down.

Can I get you to talk a bit about how close you guys are to winning the SAL Championship?
It's not over yet. I think we're really focused and we have a lot of good momentum going. We just have to stay consistent like we are.

How much fun was last Friday night, being able to lock down a trip to the championship series at home?
It was fun, man. This was my second time doing it (referring to clinching their playoff berth with the best record in the 1st half of the season).

With your struggles early in the season, you lost some playing time, but you really rebounded well. What are your thoughts on how you've improved in the second half of the season?
It's a blessing in disguise. It gave me a lot of time to work on things I needed to work on. Once I got a chance to get back in there, things I worked on while I was on the bench observing, they helped me on the field.

The coaching staff here seems very well liked. What can you tell me about the Lakewood coaches?
It's a great coaching staff. I had Dusty (Wathan) last year, and he's a great manager, when I went down to Williamsport. (Greg) Legg as been with me for the past three years, so these guys really know me. Bob (Milacki) is great as well. The whole staff is great, everybody gets along so well. They're very, very good professional coaches that help us.

Do you think anyone on the Lakewood team is underrated?
Not in my eyes...I mean, probably to the media, but in my eyes I know how good we all are. I just sit back and enjoy watching everybody, from 1 through 9. Some guys may not be in the spotlight that should, but as long as we win, that's all that matters.

What type of advice might you give to teenagers who hope to play baseball beyond high school?
Just know yourself. Never give up. Make sure you have your priorities in order. Go out there and have fun.

If you could face any pitcher in baseball, who would it be and why?
I admire a lot of pitchers. Peavy tops the list. I'd like to face Justin Verlander though. I met him one time up north. He'd be a cool guy to face, since I know him.

Listen to the BlueClaws in the South Atlantic League Championship Series tonight at 7pm EST, on The Shore Sports Network. Link here.