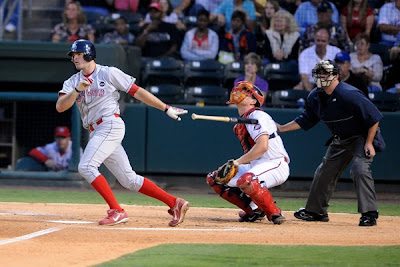 Three hits each by Jim Murphy and Anthony Gose as well as five shut out innings from Trevor May were not enough for the BlueClaws, as they lost to the Greenville Drive on Thursday night.

Timely hitting, praised earlier in the week by Lakewood manager Dusty Wathan, was absent for the 'Claws on the road against the Drive. From the 2nd to 4th inning, Lakewood left 7 runners on base. They left 12 runners total on base over the entire 9 innings.

Lakewood broke a scoreless tie in the 5th inning on back to back doubles by Travis D'Arnaud and Jim Murphy.

Up 1-0, Wathan chose to relieve May after the 5th, and used lefty side armer Jacob Diekman, who ran into trouble. Diekman walked two batters, then gave up an RBI double to Mitch Dening and an RBI single to Casey Kelly, before he was pulled. Luke Wertz came on, and stopped the rally with a sacrifice fly by Ty Weeden and then struck out Oscar Tejeda. All 3 runs were charged to Diekman, and it was all the Drive needed.

Lakewood got within a run in the 8th when Travis Mattair drove in Sabastian Valle on an RBI double. 3-2 would be the final score, however, and the Drive won their first game in the series.