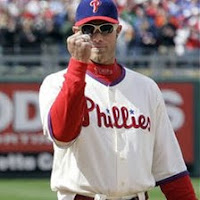 Ed Wade's Houston Astros (72-83) come to town to face the Phillies (90-65) for a four game series beginning Monday night. The Phillies' magic number to clinch a third straight division title stands at 3. The Phillies need a combination of their own victories and Braves losses totalling 3 to win the NL East and take the first step toward adding to the team's ring jewelry collection. Read on for additional information and pitching matchups from this series.


Mike Bourn is a .318 career hitter with 9 steals in 11 games against the Phillies. Bourn leads the National League in steals with 59.

Chris Coste has not homered yet as an Astro. His OPS is an extremely low .516 with Houston.

Carlos Ruiz is still expected to miss at least one more game with a sprained wrist. In 14 career games against the Astros, Ruiz has a .326 batting average.

BlueClaws Blog has details on a minor league matchup from 2003 when Cole Hamels, then a BlueClaw, faced Marlins prospect Yormin Bazardo. Check that out here.