The Stopper, AKA- Mr. Happ 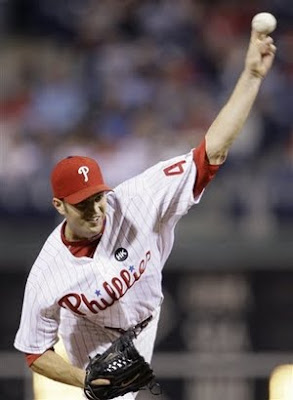 There may be a very tough decision regarding "Jay" Happ's role on the post season roster. 4th starter? Long man? Situational lefty reliever? Late inning fireballer? It could be any of those.

Happ has been the stopper whenever the Phillies needed him. Following his victory over the Astros on Tuesday evening, the rookie is now 7-0 with a 2.31 ERA in 11 starts following a Phillies loss. That's right...undefeated in 11 games after a loss! Happ averages more than 6 2/3 innings in those games. Furthermore, he is now 12-4 with a 2.85 ERA overall. Could the Phillies afford to, more or less, demote a man who has put forth such solid efforts whenever he has been called upon in a starting role? They may need to.

If JC Romero or Scott Eyre are not able to pitch, due to injuries, then Happ could surely be needed as a lefty in the bullpen. Other left handed options Jack Taschner and Jamie Moyer are also nursing injuries. However, if there is no need for that lefty arm in the bullpen, perhaps Pedro Martinez could be considered for relief duties, which would allow Happ to start.

Everyone knows the Phillies' top two starting pitchers will be Cole Hamels and Cliff Lee, not necessarily in that order. My management thoughts, with Happ's stopper prowess and bullpen health issues in mind, would leave all options open going into a series. If Hamels, Lee and third starter Joe Blanton put together solid efforts and a game four (more likely a scenario for the 2nd and final rounds) is NOT a must win, then maybe Happ could be used in a situational relief spot if needed, or perhaps saved for a later game. On the other hand, if Hamels and/or Lee go out and have a poor outing, and as a result a later contest becomes a must win game, then Happ should be the guy, without question.
Whatever role Happ fills in the Phillies' second season, it has truly been a pleasure to watch him mature as a pitcher in 2009 and to watch him excel as a standout hurler for a defending World Champion.
-----------------------------