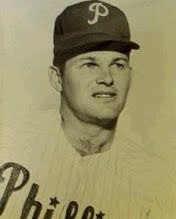 Chris Short was a Phillies pitcher from 1959-1972. Short was a big strong left hander who spent two seasons in the Phillies' minor league system before making his debut with the big club.

In his early years, Short would work mainly out of the bullpen. Phils manager Gene Mauch did not care for Short much because he was a young pitcher who had a tough time with his control, thus Short only got on occasional starting assignment early in his big league career. Short would later add a curveball to his pitching repertoire, and his career took a turn for the better.

In 1964, Short was given a chance to start regularly and he surely made the best of it. For the season, Short would go 17-9 in 42 games (31 starts). Short won 8 of his first 12 starts that year, including 3 shut outs. Short's 2.20 ERA that season was 3rd lowest in the National League...behind only Don Drysdale and Sandy Koufax.

The next season, Short would go 18-11 with a 2.82 ERA. Short opened the 1965 season by throwing a four-hit shutout against the Astros in the first regular season game ever played in the Astrodome. By the all star break, Short had thrown 5 shutouts. In his final outing of the year, Short tossed 15 scoreless innings against the Metropolitans and struck out 18 batters. Short threw 297 1/3 innings that year, his single season high.

Chris Short was released by the Phillies after 1972 and spent the 1973 season with the Brewers, mainly as a reliever, before retiring. Short was inducted as a member of the Phillies Wall of Fame in 1992.