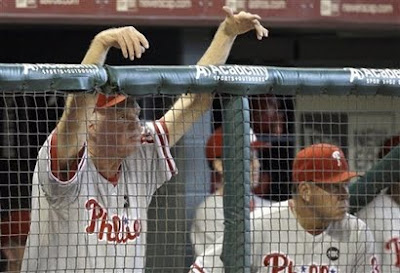 Have you heard that Ed Wade, Chris Coste, Mike Bourn and Jason Michaels just beat the Phillies in four straight games? I am stunned that I have to write about this.

Charlie Manuel said it best on Sunday when he told the media, "We had a bad series, and that’s saying it lightly, I guess. They outplayed us. They deserved to win. We keep playing like that it’s going to be tough for us to win [many more games]. We did almost everything we could do to lose."

There are certainly different ways to take a series sweep like this. The Phillies could be displaying their inconsistencies and showing they aren't a lock for the NLCS or even the playoffs. On the other hand, the Phillies still own a 6 game lead in their division, and this series in Houston shouldn't discredit the season the Phillies have had thus far.

This time last season, the Phillies were trailing in both the division and the wild card standings. Heading into the 2nd weekend of September 2008, the Phils were 3 1/2 games behind the Metropolitans and 4 games behind the Brewers. The Phillies swept the Brewers in a four game series at home, following a 4-5 start to the month.

The Phillies now look forward with their next 10 games against the Nationals and Metropolitans. Those two teams are 43 and 13 games under .500, respectively. It shouldn't be too much trouble for the NL East leaders to bounce back.

Slump is a term that could easily be applied to the Phils' struggles as of late. Entering Sunday's game, the Phils still led the National League in runs per game, with an average over 5, but in the past 11 games, they've only scored 23 runs total (2.09 runs per game). It has been over two weeks since the Phillies actually scored 5 or more runs in a game.

The Phillies have injured pitchers on the disabled list (JC Romero, Clay Condrey), but even the active pitchers are banged up. "Jay" Happ missed his start with a strained oblique on Monday, Ryan Madson is missing time with the same issue, and Brad Lidge needs rest with a blister on his pitching hand.

Uplifting stat of the day...Jamie Moyer has a 1.86 ERA in four appearances since he was removed from the starting rotation, after his August 9th start.