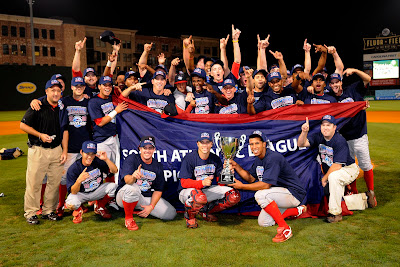 On a night when the first pitch was delayed by rain, Lakewood newcomer Korey Noles threw 7 strong innings to earn the victory and lock down the BlueClaws' second ever South Atlantic League Championship.
Noles was strong on Friday night. He faced the minimum through 4 innings, and had the Red Sox affiliate Greenville Drive shut out through 6 2/3 before he gave up an RBI double to first baseman Kade Keowen.
Noles a 24th round pick out of Columbus State University in 2008, joined the team on September 2nd. Prior to the Championship Series, manager Dusty Wathan said of Noles, "He throws strikes, keeps the ball down, and can get deep in the game. Even though he's only started one game for us, we have no issues moving him right into the start for game four."
The BlueClaws took the lead in game 4 on the third batter of the game. After a lead off single by Anthony Gose to start the game, Harold Garcia bunted him over. Gose then stole his first of three bases on the night and took third. Travis D'Arnaud grounded out to drive home Gose and the 'Claws led 1-0. D'Arnaud's RBI ground out was one of three productive run scoring outs in the game for Lakewood.
In the 3rd inning, Troy Hanzawa led off with a walk. Gose singled two batters later. Harold Garcia then drove in Hanzawa on a sacrifice fly. Next up was D'Arnaud, who singled to center. The throw in from the left fielder Mitch Dening was wild in the infield and the speedy Gose scored on the error.
In the 4th inning, Hanzawa drove home Sabastian Valle with an RBI single. And later in the 8th inning, Gose plated Travis Mattair, Lakewood's fifth run, by grounding into a fielders choice.
Lakewood reliever Austin Hyatt, a 15th round draft selection this year, continued the dominance by newly added hurlers. He threw 2 scoreless innings, while striking out three. Hyatt joined the team from Williamsport on September 2nd. 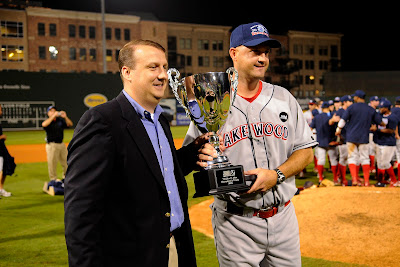 Congratulations to AG, Travis, Troy, Moose, Justin, Trevor, D'Arby, Dusty, Jeremy, Jesus, Ryan, Bob, Jacob, Matthew, Big Jim, Kyle, TJ, Harold, Jacob, Korey, Sabastian, Greg, Geoff and everyone else on and with the team. It has been an amazing season. Thank you all for letting me be a part of it.