By Jay Floyd September 21, 2009
This was to be a day when the Phillies began a three game series in Florida against the Marlins. Months ago it was announced that today's scheduled game would be moved and instead be played to open the second half, and shorten the Phillies' all star break by one day, in order to accommodate the NFL and Monday Night Football. Some of you may have long forgotten that, and there may be others who still have their original schedules and think the Phillies have a game today against the Marlins. Well, no...they are off. Instead they will begin a three game series at Florida with a double header on Tuesday.

The Phillies' injury problems continue to grow, with Chan Ho Park damaging his hamstring recently, and news popping up over the weekend that Brett Myers has a sore shoulder, then Carlos Ruiz spraining his wrist, and even rookie "Jay" Happ pulled an oblique during his start on Friday. Oh, and Pedro Martinez, who left his latest start early, could miss his next start with a strained neck muscle. That group adds to the list of already ailing Phillies JC Romero (forearm strain) and Scott Eyre (loose body in his elbow). Jack Taschner is also reportedly in Clearwater dealing with a back strain.

We'll have more later, but in the meantime, check out this picture of Ryan Howard Hulking out and a couple links to some Phriends of PhoulBallz. 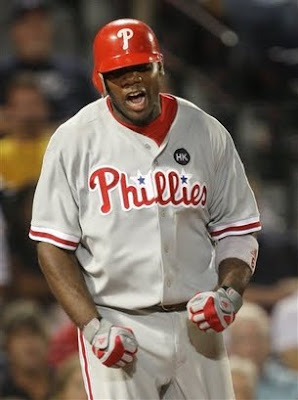 The Good Phight stays on top of all things Phillies. You should be checking out their site.

And if there's any of you out there interested in WNBA playoff action, my friend Jenn has all the insight at Real Women Play Hoops.