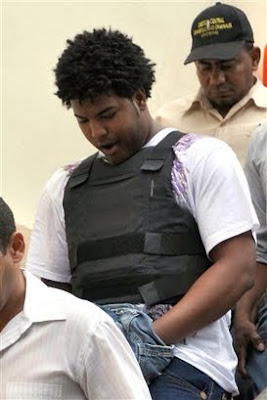 San Francisco Giants minor leaguer Angel Villalona turned himself in to police Sunday following a killing in the Dominican Republic. A 25 year old man was shot to death in a bar and Villalona, 19 years of age, has been charged with his murder. Limited details are available and no motive has been made known.
The legal drinking age in the Dominican Republic is 18 years old.
Villalona was signed by San Francisco at age 16 and was given a team record signing bonus of $2.1 million. Villalona, a first baseman, played in 74 games with advance A level San Jose this season, but had missed much of the second half of the season due to an injury. His last game played this season was on July 7th. In 2009, Villalona batted .267 with 9 homers and 42 RBI.
The Giants have not said much of the situation, only stating they are "disappointed" and "will monitor the situation".
----------------------------
Follow PhoulBallz.com on Twitter HERE!