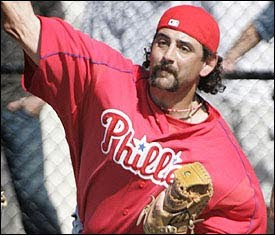 Phillies phans should remember Sal Fasano fondly. In 2006, Fasano was the Phillies' back up catcher who hit .243 and slugged 4 homers in 50 games played. Sal's unique mustache and tough guy vibe won over the Philadelphia crowds and a fan group called Sal's Pals was born. Prior to playing with the Phillies, Fasano debuted with the Royals, and made stops in Oakland, Colorado, Anahiem and Baltimore. Fasano was a true journeyman who had no qualms about his reserve role where ever he went.
Today, Twitter user and Phillies phan Sara Scott passed along an article that I feel deserves mention here. SI.com's Jeff Pearlman detailed the Fasano family's struggles with health coverage for their 2 year old child, Santo, who suffers from a serious heart condition. The article can be found here. Santo's condition, hypoplastic heart syndrome, requires medical attention to help his underdeveloped heart to mature properly. To this point, Santo's surgeries have cost over $1 million.
Fasano, who played with Colorado's triple A team this season, hoped to be brought up to the majors at some point this year in order to extend his family's health coverage. One day on a major league roster in 2009 would have extended Sal Fasano's coverage another full year. The insurance would take care of anything the Fasano family might need, in relation to Santo's health. Young Santo is scheduled soon to have his third, and what the family hopes will be his final, heart surgery.
The Fasano family opted to not front the $20,000 needed to extend their insurance with Cobra coverage, as they could not afford it. Sal took a risk, signing with Colorado and hoping for a Major League promotion at any point during the season. That did not happen.
Colorado GM Dan O'Dowd is fully aware of the Fasanos' serious situation. Yahoo Sports shows the Rockies' roster totalling 38 active players. As most fans are aware, MLB rules allow teams to carry a maximum of 40 active players from September 1st till the end of the regular season. The Rockies have room for Fasano, and Dan O'Dowd could do the right thing by a man who has played baseball hard for a long time, or do right by that man's family.
It is not too late, Colorado Rockies. Sal Fasano can still be a major league player this year. Make the call, Mr. O'Dowd.
Phillies phans, pass this, or the SI.com article, along. Who knows...maybe we can still prove to be valuable pals to our boy Sal.