Options for the Back End 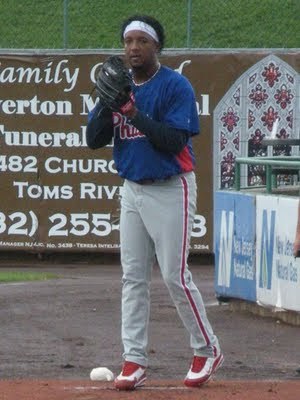 Charlie Manuel told the Phillies beat reporters last night that he would consider using "Jay" Happ in a key late inning role. Andy Martino, David Murphy and Scott Lauber all talked about it on their web pages.

Some members of the media would prefer to see Pedro Martinez in that role over Happ, however. Using Pedro in a one inning relief role may be risky. His ERA from pitches 1-30 in his appearances with the Phillies is 4.05. Pedro's total ERA after his 30th pitch this season is 2.96. We've all seen him give up those first inning lead off homers a few times. The ERA evidence shows that Pedro struggles early and perhaps takes a little time to settle into a game. There is no room for that as a closer.

Personally, I've been an advocate for a closer by committee movement. The Phillies should use preferable and situational match ups to their advantage. If Chad Durbin has a better history against a particular batter than Ryan Madson or Brad Lidge does, go with Durbin. If Brett Myers gets himself right and dominates a certain team, use him. Once the playoffs come, and the starting rotation needs become less (4 pitchers instead of 5), then perhaps Martinez or Happ can slide into a spot and can be beneficial in relief.

In a season where the offensive starting lineup is likely more solid than it was in a championship season last year and the starting rotation is pitching better than it did in that same championship season, it would be a complete shame if the bullpen ruined what could potentially be another magical year. It's good that Manuel finally sees the need to make adjustments, but let's hope he does a proper job of deciding what the adjustments should be.

Fan IQ has a review of the ugliest baseball uniforms. Check it out here.