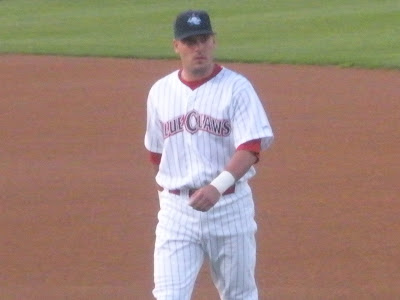 Greg Dobbs has been a key reserve for the Phillies in recent years. Currently sidelined with a strained right calf, Dobbs is trying to come back from his first ever stint on the disabled list. Dobbs played a rehab game with single A level Lakewood on Tuesday night and I had the chance to speak with him. Here is how that went down.


How did the calf feel out there in your first rehab game?

It felt good. First rehab back, yeah. It's a work in progress, we gotta go through these stages of just keep on strengthening, getting it stronger, getting into games and working the tolerance of it back up.


Were you favoring the leg at all?


What is the game plan going forward in the coming days to get you back on the big league roster?

I don't know. From what I am told, I am heading back to Philly tomorrow, to talk with them...and probably go over things and see how I feel and they'll assess me and go from there. So other than that I have no idea.


How anxious are you to get back?

Very! This is my first stint on the DL and it's not fun at all. You don't want to be away from your teammates, you don't want to not be showing up the ball park every day and putting your uniform on and helping your team win games. So, it's frustrating, it's been a long time. I'm just praying and knocking on wood here that I can continue to progress with this and get it stronger and better and not have an issue with it in the future.


What did you miss most during your down time with the injury?

First, I missed my family the most. I wasn't able to see them at all, which is tough. And second, being around my teammates. Being in that clubhouse, putting that uniform on. You get in that cycle and get in that rhythm of showing up every day, doing your work...and you forget how precious that time is to put a uniform on. So, it's definitely brought that back to me. Not being able to walk to my locker and put that uniform on everyday has made me realize how special it is.


What did you think of the ballpark here in Lakewood?

I liked it- it's really a nice ballpark. It's a pretty park. The park plays well, it plays fair. The infield played well. They should be very proud of it. Having a low A team in this type of facility says a lot for the organization.


Is there anyone on the big league Phillies roster that might be somewhat underrated in your mind?

Underrated? I think Carlos Ruiz might be a bit underrated. He works tremendously hard, he's great behind the plate, he calls great games, he's smart, he reads hitters throughout the game. I think in the eyes of the phans, he's extremely underrated.

The Natural. I mean it's just an epic movie about baseball and about life. And how the two run hand in hand and how baseball's a good teacher of life...and life's struggles and life lessons. I think Robert Redford did a tremendous job, not only directing that movie, but acting as well.


What is your favorite road city to visit?

It's gotta be LA. I was born and raised there, so the first time I went back there and set foot on the field in Dodger Stadium was really, really special. I've been to so many games, growing up as a kid, just watching those great teams...Scioscia, Pedro Guerrero, Steve Sax, Steve Garvey, Mike Piazza, I mean we went there a lot! So to be able to step on the field and actually play on that field where I watched all those great players play is really special.

Reminder- check out The Shore Sports Report today around 3:20pm EST, for your live radio dose of PhoulBallz and Phillies baseball. Coming to you from Fox Sports 1310 and WOBM 1160AM. It'll make you feel good.

Jay Floyd said…
Dobbs is a really good guy. I hope he is able to shake off any rust and help the squad with some good at bats down the stretch.
September 17, 2009 at 12:37 PM