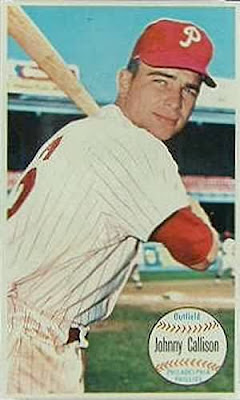 Johnny Callison was the Phillies right fielder from 1960-1969. The slugger, who spent a decade with Philadelphia, was originally signed by the White Sox and broke into the Major Leagues at age 19, before big league pitching got the best of him and he was sent back down to continue to mature in the minors.
Following the 1959 season, Callison was acquired by the Phillies in a trade for Gene Freese. In his early years with Philadelphia, Callison dealt with some hindering injuries, prior to having a bust out season in 1962, when he hit .300 with 23 homers and 83 RBI. That season, Callison would be named a National League all star for the first of three times in four seasons. Callison's 1962 campaign marked the first time in 30 years that a Phillie ended a season with at least double digits in HR, doubles, triples, and stolen bases. The previous Phillie to do that was Chuck Klein.
Callison is often best remembered for his performance in the 1964 all star game at Shea Stadium. With two outs in the 9th inning, Callison batted against Red Sox pitcher Dick Radatz. Johnny Callison won that game for the National League with a walk off homerun and was named MVP of the game.
Aside from the all star game heroism, 1964 was a career year for Callison. He batted .274 with 31 homers and 104 RBI. He finished 2nd in league MVP voting that year.
1965 was another huge year for Callison, with 32 homers and 101 RBI. Both were tops in the NL.
Defense was also a key attribute in Callison's game. He possessed a very accurate throwing arm a had plenty of range. Starting in 1962, Callison led NL right fielders assists for 4 straight seasons.
Following the 1969 season, the Phillies traded Callison to the Cubs. His offensive numbers began to decline, however and Callison was eventually traded to the Yankees in 1972. The Yankees later released him and his playing days were over. In 1997, Callison was named to the Philadelphia Baseball Wall of Fame.