BlueClaws Roll Into SAL Championship Round 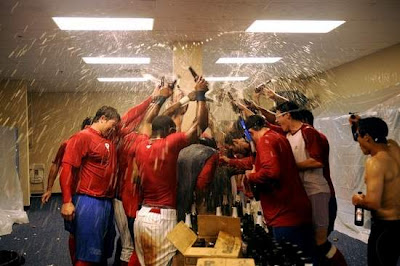 The first round of the South Atlantic League playoffs was perfect for the BlueClaws. A win on the road Wednesday put the 'Claws in position to clinch a trip to the championship series with a win on Friday night against the White Sox affiliated Kannapolis Intimidators. And it didn't take long for the BlueClaws to convince the small rain-dwindled crowd that Friday would be the night.

The scoring began in the first inning when DH Sebastian Valle singled home catcher Travis D'Arnaud. This began the small FirstEnergy Park crowd on a full night of yelling, celebrating and rally towel waving. The Park seemed about 1/4 full most of the night, but the volume of their cheers sounded like the place was at capacity.

Lakewood continued scoring in each of the next three innings. In the second inning, left fielder D'Arby Myers plated shortstop Troy Hanzawa with a double before Travis D'Arnaud smashed a big two-bagger that scored pro ball's stolen base leader Anthony Gose. In the third inning, Hanzawa scored Valle on a fielders choice. And in the fourth, RBI doubles by Harold Garcia and Jim Murphy each had RBI doubles. This put the BlueClaws up 6-0 and with starting pitcher Trevor May dominating the Kannapolis offense, there was no Intimidating going on.

May surrendered singles to the first two batters of the game, then got the next 18 outs without allowing another hit, giving up just 3 walks the rest of the way. May, who will turn 20 years old in less than two weeks, continues to show why a lot of people around the organization and in the media consider May a big prospect on the rise. He struck out 8 Kannapolis batters and extended his streak of great starts with Lakewood. May has not allowed more than one earned run in any of his last six starts, and his ERA over that span is 0.87, with 37 strikeouts in 31 innings. Since joining the BlueClaws in mid-June, SAL opponents batted just .211 against May in the regular season.

"Having runs scored early was huge and I was glad I could throw with the lead and throw good", May said after the game.
Trevor May mowing down the Intimidators
Early success and pitching dominance aside, the BlueClaws weren't done. With Garcia and D'Arnaud on base in the sixth inning, 19 year old Sabastian Valle, who is 8-for-23 (.348 avg) since returning to Lakewood from a demotion to Williamsport earlier this season, slammed a three run homerun to lock in what was already a sure victory, based on the confidence level of the BlueClaws players from the start of this game.

All that was left was for Jacob Diekman, Ryan Bergh and Freddy Ballestas to each get three outs in relief. They each did so. Combined, Diekman, Bergh and Ballestas allowed one runner, but zero hope to the Kannapolis team that was destined for a quick exit from the playoffs.

Lakewood manager, and former Phillie, Dusty Wathan spoke after the game. "It’s a special team,” Wathan said. "When there’s something on the line it seems they all step up. One through nine everybody contributed tonight. We got on them and didn’t let them have a chance to get back in the ball game."

It was one of those post season games that Phillies phans loved so much last year...A game with so much on the line, where phans who have waited a long time to see a real winner simply knew their team would win. The vibe with the BlueClaws is much like the 2008 World Series winning Phillies. It's a roster of guys who love their manager, are appreciative of their spots, share all the credit, have fun and work their hardest. Best wishes going forward to the 2009 Lakewood BlueClaws.

All unused tickets for Friday night's rain soaked clincher and Saturday's game 3 that was not played can be exchanged for SAL Championship Round tickets for Monday and Tuesday. Exchanges are available at the BlueClaws box office. No tickets yet? Come on out and support your future big league Phillies! Click here to get your tickets for the SAL Championship.
Photos by Dave Schofield.
Hey, follow PhoulBallz.com on Twitter HERE!