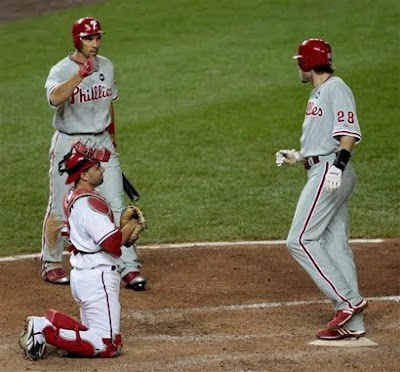 Let's all thank Charlie Manuel for finally reaching a point where he had seen enough of Brad Lidge. Lidge was in the midst of another nerve racking outing on Tuesday against the Nationals, when Manuel pulled Lidge for reliever Ryan Madson. The Phillies entered the bottom of the 9th inning holding a 2 runs lead, but Lidge quickly loaded the bases with Nats. Upon entering the game with just one out, Madson retired Washington's best two offensive threats, Ryan Zimmerman and Adam Dunn, in order.
Manuel continued telling reporters after the game that Brad Lidge is still the team's closer. That's not exactly what many phans wish to hear at this point, but at least Charlie has begun to consider other options.

The other big event of the evening was that both Chase Utley and Raul Ibanez hit their 30th homeruns of the season. Along with Ryan Howard and Jayson Werth, they become the first foursome in Phillies team history to all hit 30 or more homers in the same season. The 2009 Phillies are just the 12th team in Major League history to have a 30-homer foursome.

Amanda said…
A much needed win. The sign of Charlie pulling him may indicate that his time as a closer may not be much longer, though he says he still is the closer.
September 9, 2009 at 3:57 PM